A professor finds the artistry in North Korean propaganda

A professor finds the artistry in North Korean propaganda 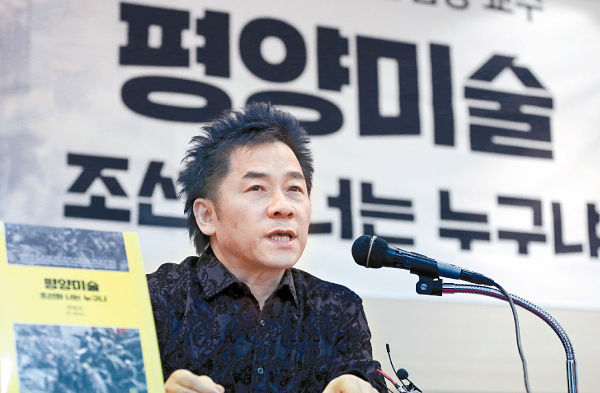 Muhn Bum-gang, a professor of art at Georgetown University, speaks at a press conference to promote his new book on North Korean socialist realist art at the Korean Publishers Association’s office in central Seoul on March 13. [NEWS1]

It was in 2010, the same year North Korea torpedoed and sank a South Korean naval ship, killing 46 soldiers. But as Muhn gazed upon the watercolor strokes, the politics faded into the fibers of the delicate hanji (traditional Korean paper). On the canvas, he saw the art’s poetic qualities.

Since then, Muhn, a professor of art at Georgetown University, has devoted all his time and resources to promoting the socialist realist paintings of North Korea, also known as chosonhwa.

Although the art form is used to glorify the North’s state ideology, Muhn argues that chosonhwa has a unique lyrical expression that merits academic attention. The paintings employ bright colors, broad strokes and a focus on ordinary human subjects - a mother and her child, a farmer and his son, a commander and his troops. They portray an idyll that contrasts the dark reality of living in the hermit nation.

“At the heart of North Korean art is chosonhwa, a fascinating new wave with a profound focus on human emotion,” he said. “Chosonhwa’s originality and depth has an element that boasts North Korea as the best in the world.”

Muhn, who lives in the United States, has traveled to Pyongyang nine times over the past seven years, a privilege that most South Koreans do not have, to learn more about chosonhwa. He compiled his research into a book, “Pyongyang Art: Uncovering the Complex Layers of Chosonhwa,” which was published earlier this month.

“I wrote and edited the book because even in the midst of crises and conflicts, it’s still important to discuss culture,” Muhn said. “I completely invested myself into this book. It took me a lot of time and money. Sometimes I worried about my safety, and other times, I was frustrated that my research was at a dead end.”

Over the years, Muhn has had opportunities to meet with directors from several North Korean museums and studios, including the prestigious Mansudae Art Studio in Pyongyang. From those visits, he was able to build a collection of paintings.

In 2016, he curated an exhibit on contemporary North Korean art at the American University Museum in Washington, focusing on the evolution of socialist realism in Pyongyang. The positive attention from American media helped him gain more confidence in his research.

Muhn hopes to present a collection of North Korean art at the Gwangju Biennale in South Korea this September, with one section capturing the everyday lives of people living in the reclusive state and another consisting of works created by more than one artist. The purpose, Muhn said, is to show the diversity of North Korean art to the outside world.

“I think we’ve now passed a point where we feel afraid of different ideas,” he said. “I will show what North Koreans want to show to the outside world, which includes ideological paintings.”

Muhn is one of 11 curators at this year’s biennale, where the theme is “Imagined Borders,” inspired by Benedict Anderson’s seminal book on nationalism, “Imagined Communities.” He plans to display 22 paintings, including four to five large-scale pieces by multiple North Korean painters, some of which, he thinks, might test South Koreans’ tolerance of ideological differences.

“Through my trips to Pyongyang and my experience writing the book, I became more proud to be born on the Korean Peninsula and was really grateful for my fate,” Muhn said. “But the sad truth is that under the harsh conditions of North Korea, there isn’t much flexibility and free time to preserve art. I wish [South Koreans] would have more interest in North Korean art because it is also part of our legacy on this Korean Peninsula.”

Muhn is currently awaiting approval from the Ministry of Unification, which handles relations with North Korea, for pieces he hopes to display at the Gwangju Biennale.