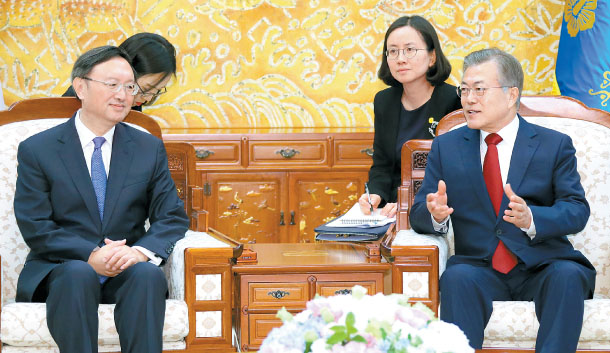 A senior Blue House official on Friday said the denuclearization framework used with Libya in 2003 that resulted in the disposal of weapons of mass destruction by the Muammar Qaddafi regime could not be applied to North Korea.

“The formula [used with Libya] cannot be used again for North Korea,” the official, speaking on the condition of anonymity, said, stressing that nuclear disarmament and its verification process had to proceed “in a gradual manner.” Explaining the greater complexity of the North Korean problem, the official said the nuclear issue had been “ongoing for 25 years” and could not be resolved in one stroke as if by “unplugging the television.”

The official’s comment demonstrates that Seoul is not looking at the 2003 Libya disarmament framework that led Colonel Qaddafi to dispose of weapons of mass destruction, including chemical and nuclear weapons, in return for sanctions relief from the international community.

The 2003 agreement is seen by North Korea as leading to the dictator’s dramatic fall from power and his murder at the hands of rebels in 2011, eight years after he signed the disarmament agreement. The ouster of Colonel Qaddafi from power and his death are proof to Pyongyang that it must hold onto nuclear weapons until it has an ironclad assurance of regime survival, experts say.

Such a stance could put the Blue House at odds with the Trump White House, especially in light of the nomination of John Bolton as national security adviser. Bolton, known for hawkish view and penchant for military action, has long championed the Libya disarmament framework, which would require North Korea to give up its nuclear and intercontinental missile programs as a precondition for sanctions relief.

In an interview with Radio Free Asia earlier this month and before his nomination as national security adviser, the former U.S. Ambassador to the United Nations said discussions at the North Korea-U.S. summit should resemble those that led to the 2003 denuclearization agreement with Libya.

“If they’re not prepared to have that kind of serious discussion, it could actually be a very short meeting,” he warned.

In another remark made on Sunday, Bolton signaled he would keep his hardline view on North Korea, warning that Pyongyang might have agreed to the summit to “buy more time” to develop its nuclear weapons and long-range missiles.

“I think we have to look at what North Korea’s motivation is here,” he said. “They’ve got a very limited number of things that they need to do in North Korea to make their nuclear warheads actually deliverable on targets in the United States so they want to try to slow roll the negotiations to buy more time.”

During a summit between North Korean leader Kim Jong-un and President Xi Jinping of China earlier this week, Kim said that the issue of denuclearization could be achieved if Seoul and Washington “respond to our efforts with goodwill, create an atmosphere of peace and stability while taking progressive and synchronous measures.”

While Kim did not specify what such measures are, experts have long believed that Pyongyang would demand a peace treaty to formally end the 1950-53 Korean War and a subsequent scaling-down, or even termination, of joint U.S.-South Korea military drills. Opening diplomatic ties with Washington or withdrawal of part, or all, of some 28,000 U.S. troops stationed in the South could be other demands in exchange for terminating its nuclear and missile program.

Meanwhile, China’s state councilor Yang Jiechi met with President Moon Jae-in on Friday at the Blue House and gave a detailed account of the Kim-Xi meeting during a meeting that lasted 70 minutes.

“While his mission was to brief Moon, he also came here to listen to Moon’s thoughts on the North Korea issue so he could report it back to Xi,” said a Blue House official. Yang praised Moon’s role in paving the way for dialogue with North Korea and noted that Beijing also had a high regard for Kim’s position on denuclearization.

Seoul and Pyongyang on Thursday agreed to hold the first inter-Korea summit in 11 years on April 27.