After explosive start to season, Choi is optioned

After explosive start to season, Choi is optioned

Despite scoring the winning run in the season opening game against the San Diego Padres at Petco Park in San Diego on Thursday, Choi Ji-man of the Milwaukee Brewers has been optioned to the minors to make room for reliever Dan Jennings on the Brewers’ roster. 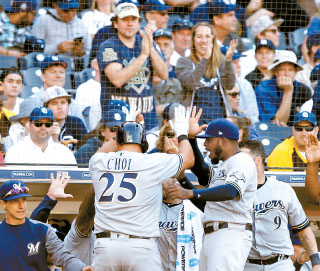 Choi Ji-man celebrates with teammates after scoring against the San Diego Padres during the 12th inning of an opening-day game at Petco Park in San Diego, California, on Thursday. [AP/YONHAP]

Although Choi’s move to the Triple-A Colorado Springs Sky Sox was expected - he was always likely to be the player sent down when Jennings returned and the Brewers had to deal with their four first basemen - the dramatic result on Friday makes this “one-and-done” story particularly compelling.

In a close game, the Brewers took the lead at the top of the third, staying ahead 1-0 for the next six innings. It wasn’t until the bottom of the ninth that a last minute run brought the Padres back into the game, tying the game 1-1.

It wasn’t until the top of the 12th that Choi, appearing as pinch-hitter, made a two-base hit for a run, giving the Brewers a 2-1 opening day victory.

Choi’s performance on Friday leaves him with the somewhat dubious honor of leaving the majors with a perfect ERA of 1.000.

“I think he knew that there was a potential for [a demotion],” Brewers general manager David Stearns was quoted as saying on MBL. “It’s still not easy to hear, especially when he had a day like he had yesterday and helped us win a ball game. But, look, he knows he’s a Major League-caliber player. We’ve made that clear to him on a variety of fronts, and he’s going to be back here.”

Choi, who played for the New York Yankees last season, signed a one year contract with the Brewers that included incentives with a possible paycheck of $1.5 million. During the spring training exhibition games, which he played under invitation, Choi finished with a 0.409 batting average, three home runs and 10 runs batted in, good enough to earn a spot on the opening day roster.

However, Choi’s spot as the Brewers first baseman/left fielder was never guaranteed, as former Korea Baseball Organization (KBO) star Eric Thames was expected to start at first base and Choi still had to compete against Jesus Aguilar and Ryan Braun for a roster spot.

Not only that, as the Brewers’ 25-man roster consists of 11 pitchers and 14 fielders, Choi’s demotion to the minors was always pretty likely. The Brewers added one less pitcher onto the opening day roster to make room for reliever Jennings, who was not yet done with physicals. As Choi was the only fielder in the roster who had a minor league option remaining in his contract, he was the obvious choice for trip to the Triple-A.

Unlike the KBO, where there are no limits in sending a player down to the second division, in the MLB the number is controlled because the minor league teams are counted as separate clubs. If a team decides to send down a player that has already used up their allotted time in minors, they have to be designated for assignment. If that happens, other major league clubs are allowed to bid for the player.

Since Choi’s contract included a Triple-A option, the Brewers could send him down with no problems.

But it isn’t all doom and gloom for Choi. After his performance at the opening game, the Korean first basemen has definitely jumped straight to the top of the list of players likely to get promoted to the majors if changes need to be made to the Brewers’ roster.

“It’s going to be a fun Triple-A team,” Stearns was quoted as saying. “I think those guys recognize that they are playing with other Major League-caliber players, and they’re all fighting to get back here.”