Giants left with egg on their face after fried chicken attack

Giants left with egg on their face after fried chicken attack

The Lotte Giants bow to fans after picking up their first win of the season by defeating the NC Dinos 3-2 at Saijik Baseball Stadium in Busan on Sunday. [YONHAP]

Lotte Giants’ supporters, the self-proclaimed most passionate fans in Korea, have taken their anger at the team’s disappointing performance this season to a whole new level, going so far as to throw chicken at the players as they left Sajik Baseball Stadium in Busan on Saturday. 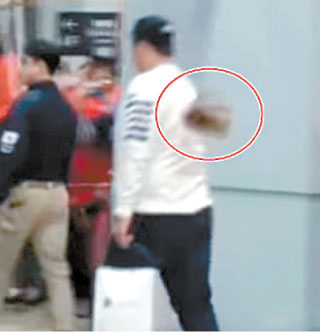 Lee Dae-ho gets hit by a box of chicken while leaving Sajik Baseball Stadium on Saturday. [YONHAP]

The Giants, who only managed to pick up their first win on Sunday after seven straight losses, are now facing embarrassment off the field after their die-hard fans turned on the team.

On Saturday the Giants once again lost to the NC Dinos 5-10 at Sajik Baseball Stadium in Busan in front of a sellout crowd.

The Giants substituted closer Son Seung-lak in the beginning of the ninth when the score was tied at 5-5, hoping that Son, who led the KBO in saves last season with 37, could close the final inning without giving up a run. Instead he gave up five.

The fans, who had come so close to finally seeing the Giants take a win, turned nasty.

Traditionally fans gather outside baseball stadiums in Korea to see the players as they leave. Saturday at Sajik was no different, and Giants’ captain Lee Dae-ho made an appearance. As Lee crossed the central square to the team bus a fan threw a box of chicken at Lee, hitting him on the back. Lee looked back in surprise before rushing off.

A video of Lee being hit by the chicken was quickly uploaded online by fans.

Though attacking a player outside of the stadium - whether with chicken or anything else - is inappropriate and likely illegal, it may have given the Giants the push they needed as the team returned on Sunday to finally pick up their first win, beating the Dinos 3-2. Giants starter Brooks Raley had the team’s first quality start, giving up two runs and seven hits while striking out seven in seven innings, but the batters once again failed to level the score.

While the Giants were losing 1-2 until the seventh, they scored two runs in the eighth to take the lead for the first time during the game, ultimately taking home their first win.

With a win, the Giants remain at the bottom of the table, seven games behind the Dinos and the SK Wyverns at the top.

Last season, Lee, who returned to the Giants after six seasons, led the team to the postseason for the first time since 2012. Lee has so far been unable to continue his stride this season, staring with a 0.226 batting average with one home run and three runs batted in. Lee’s not the only one - the entire Giants’ batting lineup is not living up to expectations, ranking last with a team batting average of 0.210.