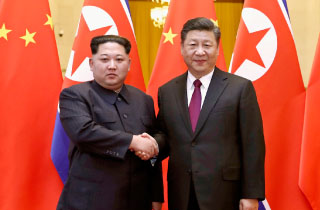 Kim may have only spent 24 hours in Beijing, but the visit, at such a sensitive time before the inter-Korean and U.S.-North summits, was enough to catch the attention of the world. What suddenly persuaded Kim to visit China after he had been criticizing the country’s participation in global sanctions and refused a summit?

The meeting between Kim and Chinese president Xi Jinping is based on the common interests of the two countries. China felt excluded from the rapidly changing situation on the Korean Peninsula and hoped to recover its influence and presence through the summit. Xi needed to bring North Korea back under its influence and understand Kim’s thoughts before the inter-Korean summit in April and the North Korea-U.S. summit. After reinforcing his one-man leadership as his second term began in March, Xi needed to play a more active role in foreign policy.

Kim Jong-un may have felt anxious after the rise of hawks like U.S. Secretary of State Mike Pompeo and National Security Adviser John Bolton before a summit meeting with U.S. President Donald Trump. So it was necessary for Kim to recover his alliance with China. He thought that the pathway to the North Korea-U.S. summit was uncertain if he relies on Seoul. It seems that he tried to secure leverage in the negotiation with the United States by normalizing his relationship with China before the summit.

Also, North Korea needed the protection of China to respond to the sanctions from the United States, which are sure to increase if the summit is called off or fails. Kim calculated that he would use the escalated tension between Washington and Beijing to ease the sanctions and not lose the initiative in denuclearization talks.

With Kim’s trip to Beijing, China has made a comeback as a main player in the Korean Peninsula denuclearization game, and it is back to being a multiple-variable equation. If Kim comes to the talks with Trump based on certain agreements in his summit with Xi, the denuclearization talks and the structure of Northeast Asia could change. Washington’s plan to lead North Korea to unconditional nuclear abandonment through economic sanctions and military pressure will not go smoothly. If Beijing becomes a solid supporter of Pyongyang again, sanctions will weaken.

China could not accommodate Kim’s visit because Pyongyang did not sincerely respond to denuclearization. Therefore, one of the key points in the China-North Korea summit was whether Kim showed his will for denuclearization. It is the most crucial indicator to the success of inter-Korean and North Korea-U.S. summits. According to China, Kim expressed a willingness to realize the denuclearization of the Korean Peninsula according to the legacy of his forefathers, but to Korea and the United States, he only discussed “phased measures” for peace. Simply put, North Korea’s attitude hasn’t changed.

The meeting between Kim and Xi before the inter-Korean summit creates considerable homework for Seoul. South Korea is determined to take the driver’s seat by mediating the landmark North Korea-U.S. summit after the inter-Korean summit. But the involvement of China could interrupt the Moon Jae-in administration’s ambitious plan, and Kim is trying hard not to lose the initiative.

As North Korea and China improve their relations, we may have to worry about the possibility of South Korea being ignored once again. Moreover, if China’s attitude toward North Korea improves, it could send the wrong signal to Pyongyang.

Like it or not, the Moon Jae-in administration needs to make sure that China does not feel excluded in the course of resolving the peninsula issues and use a more delicate approach to make China a partner in denuclearization. At the Seoul-Beijing summit in December 2017, the two leaders promised to open a hotline and reinforce strategic communication. President Moon needs to contact Xi to learn more about his meeting with Kim and emphasize his will for cooperation in the journey to denuclearization.

The author is a senior researcher at the Institute of National Security Strategy.