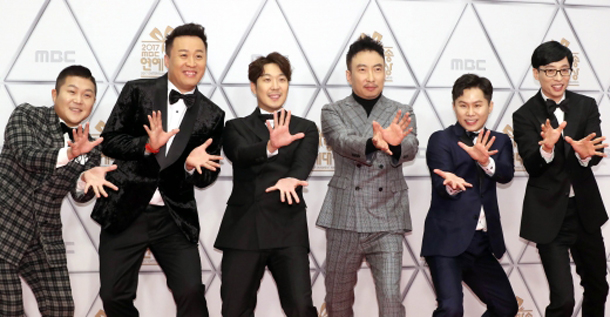 After 13 years and 563 episodes, “Infinite Challenge” aired its last episode Saturday before it goes on hiatus.

Kim Tae-ho, the producer of the show, emphasized that the show is taking a break and it is not officially ending. The mood was still sad, though, among cast members and fans.

The episode began with each of the members going on their own missions like any other “Infinite Challenge” episode. Then ended with the members coming together to share their last words, starting with the host of the show, Yoo Jae-suk.

Yoo thanked the members saying, “I was able to lead the program for 13 years all thanks to the members.” Park Myung-soo shared his regrets from the early days of the show, and said “I’m thinking, ‘Why didn’t I work harder back then?’” Jung Joon-ha was in tears when he said, “[I] am thankful [for having been part of the show] for 13 years.”

Yoo thanked newer cast members Yang Se-hyeong and Jo Se-ho for joining the team during harder times. Back in January 2017, the show went on a seven-week hiatus. The producer, Kim, said he wanted to take time off to reorganize the show.

Yoo promised that when they return with a new season of “Infinite Challenge,” they will be back in full force with more hilarious and tear-jerking episodes for viewers.