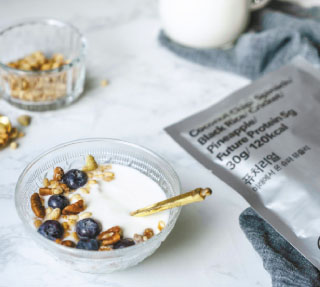 Emart’s cereal aisle is about to become infested with bugs as the company prepares to roll out insect-based products at its premium grocery stores this month, the first major brick-and-mortar retailer in Korea to embrace this next-generation protein source.

Local company Future Food Lab’s “Future Real” muesli comes in three varieties, with insects as the main source of protein for two of them. The apple-based product uses powder made from meal worms, while the coconut flavor uses crickets. The third variety, which is the strawberry flavor, uses mushrooms instead of bugs.

Each package weighs 30 grams (1 ounce) and contains 1.5 to 2.5 times more protein than conventional cereals of the same weight, said Emart.

Sales will start at five of Emart’s premium grocery stores - PK Markets in Starfield Goyang and Hanam, both in Gyeonggi, SSG Food Markets in Cheongdam, Gangnam District, and Haeundae, Busan, and Star Super in Dogok, Gangnam District. Based on sales and consumer responses from the trial run, Emart plans to eventually expand distribution to its discount chains.

“Edible insects are receiving attention around the world as an eco-friendly and economic future food source, which is why we see growth potential for a local market,” Emart said in a statement.

In Korea, the idea of eating insects is not totally new. Bundaegi, a dish made of boiled silkworm pupa, is relatively common street food. Having appeared before Korea’s economic boom in the 1980s, it was once considered a cheap delicacy to enjoy with soju. With more options available today, bundaegi is not as popular as it once was, but it is still sold in cans for soju lovers at brick-and-mortar retailers.

However, efforts to convert insects into more common foodstuffs stem from a global movement to develop them into the next-generation food source. Edible insects are considered one of the major fields of “food tech,” where the core question is finding a solution to replace livestock as the dominant protein source.

A major booster to the sector is the increasing awareness of greenhouse gas emission from livestock. According to the Food and Agriculture Organization of the United Nations, producing 1 kilogram (2.2 pounds) of beef emits 1,000 times more greenhouse gas than the same amount of insects.

Another advantage is cost-efficiency - they require one fifth the amount of feed compared to cows, consume less water and take up less space. Some experts say that insects will inevitably become part of our diet considering growing populations worldwide.

Although smaller in size and relatively unknown to the public, the local insect food market has also been growing: The number of insect farms grew to around 2,600 last year, almost four times the 724 in 2015.