In Pohang, an old mill learns some new tricks

In Pohang, an old mill learns some new tricks 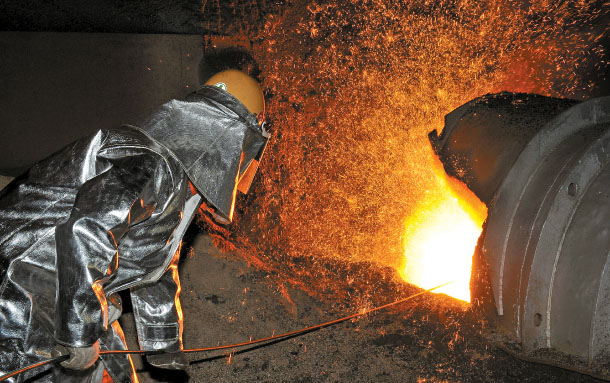 The Pohang steel mill dominates the skyline of the coastal North Gyeongsang city with which it shares a name, a colossal monument to the rapid growth of Korea’s steel industry and the impact it has had on the country’s developing economy since the 1970s.

The Pohang mill was the first in the country capable of carrying out the entire steelmaking process, from smelting iron ore to producing the finished rolled products. In fact its opening was so poignant that the day it first smelted iron ore, June 9, 1973, is known as the “day of steel,” and is still celebrated by some Koreans today.

The steel mill, which sits on more than 2,000 acres of land and dominates the city of Pohang, seemed quiet when the Korea JoongAng Daily visited the site on Saturday. But inside was a different story. A hot rolling mill that has stood through most of Posco’s 50-year history was alive with action, with steel plates being processed under a thick smoke created when water meets the red-hot steel plates as they are turned into hot-rolled steel coil.

A hot rolling mill processes thick slabs of refined steel through a roughing machine into the specific thickness and size requested by customers. The processed steel is then cooled down with water until it turns from red-hot to a more familiar dull grey. The cooled plates are then coiled until they take on the look of a giant metal toilet roll.

As hot-rolled steel is a basic from of steel, the coils can be delivered directly to customers or processed again into higher value-added steel products.

This is traditional steelmaking. It’s tried and tested, but it’s far from smart.

But Posco has more tricks up its sleeve. The company has been striving to apply smart technology to its mill since 2016, and one of the most successful tests was on its blast furnace.

Posco has fitted sensors in the second blast furnace to measure the temperature. This system has allowed the steel maker to reduce temperature deviation by 25 percent, saving a considerable amount on the company’s hefty heating bill.

According to a Posco spokesperson, the furnace temperature should be maintained at around 1,500 degrees Celsius, and a subtle drop to 1,400 degrees could “freeze” the furnace. Workers used to check the temperature by manually measuring it with a specially designed thermostat every two hours.

At this furnace, three workers stay in the central command center and allow the sensors to tell them the information they need in real-time. Artificial intelligence programs can then use the data from the sensors to advise the workers on when and how to control the temperature.

The workers there can also monitor the quality of iron ore to be used in the furnace with a new close-up high-definition camera.

“There were difficulties in finding out what data is relevant and how to gather that data,” a spokesperson from Posco said. “But already we have saved roughly 64.7 billion won ($61 million) from our model plants over the two years.”

Posco is keen to fully digitize its factories. Kwon Oh-joon, chairman of Posco, has been showing great interest in digitizing the company’s factories. In January he became the first chief of the steelmaker to visit the Consumer Electronics Show held in Las Vegas.