Kumho union votes in favor of sale to Doublestar

Kumho union votes in favor of sale to Doublestar 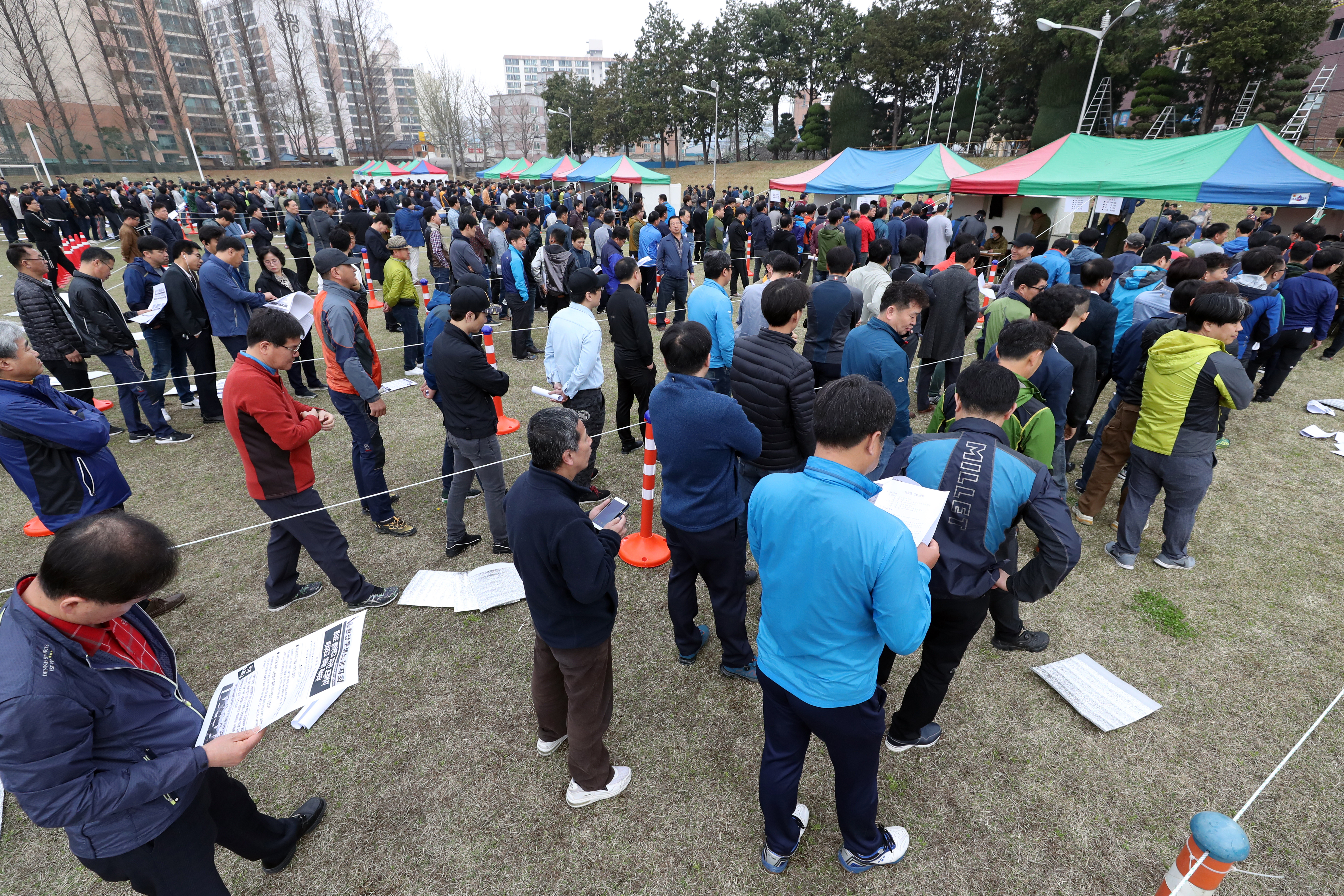 Kumho Tire's union workers form long lines to cast a vote on creditors' plan to sell the tiremaker to Doublestar to avoid court receivership at its main plant in Gwangju on Sunday. [YONHAP]

Ahead of a critical meeting tomorrow on Kumho Tire’s fate, the struggling tire maker’s union voted today to sell the company to the Chinese firm Doublestar.

According to Kumho Tire, 60 percent of the 2,741 voters were in favor of the sale to the Qingdao-based tire company. Over 90 percent of the company’s 2,987 union workers participated.

Eight of the company’s creditors, led by the state-owned Korea Development Bank (KDB), are expected to sign an agreement to sell 45 percent of their stake in Kumho Tire for 646 billion won ($609 million) to Doublestar tomorrow. The stake held by the eight creditors will shrink from 42 percent to 23.1 percent as a result, and Doublestar will take the helm as the company’s largest shareholder.

The union workers reversed their opposition to the Doublestar sale after President Moon Jae-in’s administration repeatedly confirmed that it would not use public funds to save the company.

On Friday, Finance Minister Kim Dong-yeon said there would be no political solution to the Kumho Tire situation.

“Without external help, Kumho Tire won’t be able to repay the debts that will be maturing on Monday,” Kim said. “If the company goes into court receivership, job security won’t be guaranteed and the local economy will also face the worst-case situation.”

KDB President Lee Dong-gull last week repeatedly stressed that if the company isn’t sold, Kumho Tire’s heavy debts could lead the company to liquidation even if it goes through with the court restructuring program.

If the agreement with the creditors is signed, Doublestar will guarantee the job security of 5,000 employees, including 2,000 office workers, for the next three years. The Chinese company will also be required to remain the largest stakeholder in Kumho Tire for a minimum of five years.

Both measures are intended to ensure Doublestar’s long-term commitment to Kumho in hopes that it will avoid the fate of SsangYong Motor. In 2004, Chinese investor Shanghai Automotive Industry Corporation bought a majority stake in the Korean automaker. The company then abandoned SsangYong in 2009 after laying off a massive number of workers and reportedly stealing the carmaker’s technologies.

To help revive the financially troubled tire maker, Kumho’s union workers have agreed to return some of their bonuses in 2018 and 2019 and accept a wage freeze and a reduction in some work benefits by 2019.

The company’s creditors plan to provide 200 billion won in fresh loans to upgrade Kumho’s manufacturing plants, in addition to extending the due date of 1.3 trillion won of the company’s loans. They will also lower the interest rates on those loans, which the creditors said would save the tiremaker 23.3 billion won in interest payments.