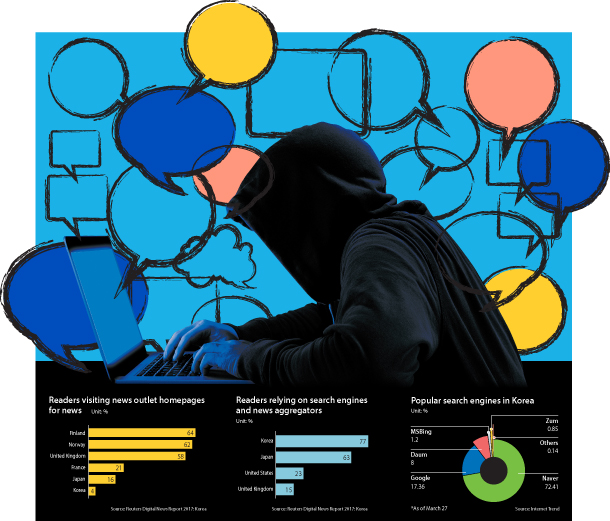 Kim Dong-hoon says the internet is his hobby. Whenever time permits, the 36-year-old freelance designer reads news articles on portal sites and posts comments, sometimes arguing with other readers who have left their own opinions.

“It’s more fun to read the comments than the news itself,” he says. “It’s cathartic when my comments get hundreds of thumbs-up from other users. I feel alive.”

A thumbs-up is equivalent to Facebook’s “like” - evidence of how many other users agree or sympathize with a comment. A thumbs-down has the opposite meaning. The thumb system is used on both Naver and Daum, Korea’s two biggest portal sites and search engines that aggregate and curate articles from different news organizations.

But Kim’s favorite hobby is someone else’s headache. In this heavily connected society where nearly 80 percent of digital news readers rely on portals and other aggregators to catch up on the latest stories - and only 4 percent actually visit news outlets’ homepages, according to Reuters Digital News 2017 - the comment section is a hotbed of controversy.

In fact, discussions on how online comments are managed and arranged, and even whether they should be allowed at all, have been going on for years, and are gaining momentum in the run-up to the local elections on June 13.

“Portal news services are not common globally, with the exception of Korea and Japan,” said Rep. Shin Kyoung-min of the ruling Democratic Party, who used to be a journalist with a broadcasting station. “The more comments a portal gets, the better they become because they are able to secure more advertising income. Looking on as malicious comments or fake news build up is no better than being an accomplice to those who produce them.”

Last month, Shin proposed revising the act on the promotion of information and communications network utilization and information protection to punish people who use a special piece of software that copies text from one place to another - called a macro-processor. This type of software can be used to rapidly leave comments supporting a certain political position or manipulate public opinion through the thumbs-up system.

Other lawmakers are preparing to propose bills to beef up control of news services on portal powerhouses such as Naver and Daum. Some are even pushing to force people to use their real names online, a system that was previously partially introduced but was abolished in 2012 after the Constitutional Court found it unconstitutional.

Politicians are particularly sensitive about portals because evidence has previously been found that the National Intelligence Service has meddled in past presidential elections by creating hundreds of internet posts to sway public opinion. Candidates pay close attention to which stories about them are popular and what kind of comments - malicious and groundless rumors, in particular - are tagged on such articles.

Those major Korean portals are different from other global players that offer some form of news aggregation like Google and Baidu because the comment sections are hosted directly by the portal site. Google and Baidu direct visitors to a news outlet’s homepage when users choose a story, rather than hosting the stories and the comments themselves.

Portals insist that regulating comments on news articles could hamper the freedom of expression of users. Scrapping the comments section completely isn’t an option at all, they say.

“It is true that the quality of news comments is lowered if the number of users with malicious intent increases,” said Yoo Bong-seok, an executive director in charge of media and knowledge information at Naver. “But degrading or giving up the comments section is a bit premature, given it is a tool to induce the participation of various users.”

Jung Pil-woon, a professor of legal education at the Korea National University of Education, said regulating Korean portals goes against the principle of fairness.

“Naver already makes users verify their identity when signing up for the service through a smartphone,” he said during a seminar on internet comments on Thursday. “Twitter and Facebook, both foreign companies, have no such procedure.”

“Freedom of expression is not something big,” said Cho So-young, a professor of law at Pusan National University. “It should definitely be guaranteed. Rather than implementing preliminary regulations or having internet portals take responsibility, specifying what to do after bad events happen such as compensation for victims might work better.”

He also refuted Shin’s claim that portals refuse to shut down their news services mainly to secure revenue from advertisements resulting from user traffic.

“We share the profit from traffic to news articles with the respective providers in proportion to the amount of traffic they generate,” he said.

Ahead of the local election, the Korea Internet Self-governance Organization, a group consisting of internet operators including portals, has been scrambling to come up with a series of measures over the past few weeks. They include limiting the number of times a user can post the same comments in an attempt to stop macro-processors. Naver and Daum will also force users to wait before posting another comment.

The comments section on Naver, which has a 72.41 percent share of online searches in Korea as of March 27, is already sophisticated enough to show the total number of comments a user has made, the number they have deleted voluntarily and if they have posted spam. In addition to the comments, the gender and age of commenters is displayed.

This data is the result of a series of changes the leading portal site has been making whenever criticism or scandals have emerged over the past several years. The Seongnam, Gyeonggi-based company has faced allegations that it has manipulated the way news stories are curated or how comments are seen on stories in order to pursue a specific political motive. The site has even been accused of permitting some users to use macro-processors to influence public opinion.

Public sentiment continued to sour after it was discovered in October last year that Naver had intentionally buried a news story unfavorable toward the Korean football league following pressure from an official at the football organization.

After Naver’s CEO Han Seong-sook acknowledged the problems with the portal’s comment system, the company vowed in February to again review the way the news service is offered. Naver on Friday announced that it has formed a panel of 20 ordinary users that will meet once a month from March until August to come up with various suggestions.

In a similar effort to enhance the management of readers’ comments, the New York Times introduced a new system called Moderator to expand its online comment forums at the same time as containing trolls in June last year. The system relies on a machine learning system called “Perspective,” developed by a subsidiary of Google’s parent company Alphabet.

“Our research has consistently shown that Times readers prefer our moderated comments spaces,” the company noted.

Jung Yoon-hyuk, a professor of business administration at Ulsan National Institute of Science and Technology, argues that trying to regulate private companies goes against the rule of a market economy.

“Naver and Daum are private companies and it should be up to them - including news outlets - whether or not to run the comments space,” he said. “Of course there are malicious comments but if you don’t like it, you don’t have to visit the site.”

The professor projected an even worse scenario where the comments section on portals are shut down and users migrate to foreign mobile networks such as Facebook and Twitter, completely bypassing regulators.