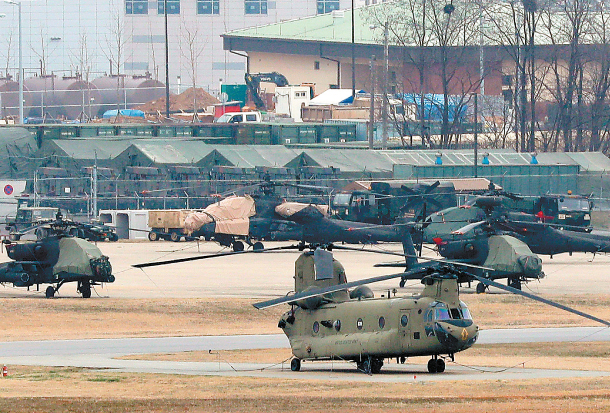 U.S. Chinook and Apache choppers are stationed at Camp Humphreys in Pyeongtaek, Gyeonggi, on Sunday, preparing for deployment in the Foal Eagle drill that will run through the next four weeks. [YONHAP]

The United States and South Korea kicked off their annual joint military exercises Sunday after a month-long delay due to the PyeongChang Winter Olympics, a major concession to Pyongyang that led to a rare rapprochement between the two Koreas.

An official from South Korea’s Ministry of National Defense said that the annual Foal Eagle drill was launched with the start of the Ssangyong joint military exercises, participated in by U.S. and South Korean Marines and Navy.

Ssangyong is expected to last until next Sunday, while the entire Foal Eagle drill will run for four weeks, down from last year’s eight-week program, which kicked off on March 1. Foal Eagle will be participated in by some 300,000 troops from South Korea and 11,500 from the United States.

Local military sources said the U.S. Navy has decided to deploy the USS Wasp and USS Bonhomme Richard, both amphibious assault ships, for the Ssangyong exercise, adding that F-35B Lightning II aircraft will travel aboard the USS Wasp.

The Key Resolve drill, a computer-simulated war game, is planned to be held for two weeks from April 23, a similar length to last year when it ran from March 13 to 24.

Washington and Seoul jointly announced late last month that the combined exercises will be held on a scale similar to those of previous years, and that the United Nations Command informed North Korea about the schedule as well as the “defensive nature” of the exercises at the truce village of Panmunjom, which straddles the border. The news was also said to have been relayed by the South Korean military through a recently restored military hotline connecting the two countries along the west coast.

The North sees the drills as a rehearsal for an invasion.

As opposed to the past when Seoul deliberately publicized the U.S. strategic assets approaching the peninsula for the exercises, local military sources said the Defense Ministry will try to keep the exercises low-key this year in order to not provoke North Korea, which has promised to halt all missile and nuclear testing during the period of talks.

North Korean leader Kim Jong-un and South Korean President Moon Jae-in have agreed to hold their first face-to-face discussion on April 27 on the South Korean side of Panmunjom, in what will be the first inter-Korean summit since 2007, the third of its kind between the two countries.

Subsequently, Kim is expected to meet U.S. President Donald Trump for the first-ever summit between the two countries, though the date and venue have yet to be determined.

Five South Korean special envoys who visited Pyongyang last month told Kim that Seoul no longer had any “justification” to stop or delay the joint exercises, to which Kim replied that he “could understand” why the drills had to resume in April and on the same scale as before, according to Chung Eui-yong, head of the National Security Council within the Blue House, who led the delegation from Seoul.