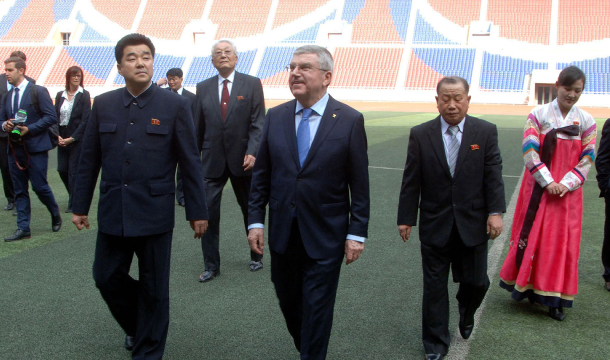 International Olympic Committee (IOC) President Thomas Bach met with North Korean leader Kim Jong-un on Friday in Pyongyang during his three-day trip to the country and was told the North was committed to participating in the 2020 Tokyo Summer Olympics and the 2022 Beijing Winter Games.

Bach, who arrived in the North on Thursday to discuss North Korea’s participation in the next Olympics, told the Associated Press he had a 30-minute formal meeting with Kim followed by a casual discussion for 45 minutes while watching a football match at the May Day Stadium in Pyongyang on Friday afternoon.

Kim explained that sport is a “pillar in his policy for the future development” of North Korea, according to Bach, who was making his first trip to North Korea since he assumed his role in 2013.

“It is the mission of the International Olympic Committee always to build bridges and by building these bridges through sport we can also make a contribution to the ongoing political talks,” said the IOC president, continuing that he hopes the dialogue will lead in the “Olympic spirit to a peaceful future for the Korean Peninsula.”

North Korea’s state-run Korean Central News Agency (KCNA) mentioned the meeting in a news report Sunday but didn’t spell out Kim’s intention to have his country participate in the 2020 Tokyo Summer Olympics and the 2022 Beijing Winter Games.

The KCNA instead focused more on the PyeongChang Winter Olympics, which wrapped up in February, citing Kim as saying that the event “opened a new chapter of concord between the North and the South.”

“The once frozen north-south relations greeted a dramatic thawing season with the Olympics as a momentum,” said Kim, according to a KCNA article published in English, “and it was totally attributable to the efforts of the IOC which offered an opportunity and paved a path for it.”

Kim reportedly invited Bach to “frequently visit” his country “as a friend.”

Kim’s meeting with Bach, who left North Korea on Saturday, was the latest step in the North Korean leader’s recent diplomatic foray, one that hit a high last Monday and Tuesday when he made his first known trip outside North Korea since he assumed power in December 2011 to meet with Chinese President Xi Jinping.

In the unannounced visit, the 34-year-old leader told Xi that he was willing to hold a summit meeting with U.S. President Donald Trump, adding - in a vaguely termed English report by China’s state-run Xinhua News Agency - that the Korean Peninsula’s denuclearization issue could be resolved if Seoul and Washington respond to Pyongyang’s “efforts with goodwill, create an atmosphere of peace and stability while taking progressive and synchronous measures for the realization of peace.”

While South and North Korea agreed on Thursday in a high-level meeting to hold their summit on April 27, officials from the South’s Unification Ministry, which handles relations with the North, said another high-level meeting could be held on April 18.

The sanctioned vessels will be prohibited from entering ports worldwide or have their assets frozen, while the shipping and trade companies will face an asset freeze.

Resolution 2375, passed on Sept. 11, 2017, prohibits any UN member-state from facilitating or engaging in ship-to-ship transfers to or from North Korea-flagged vessels of any goods or items that are being supplied, sold or transferred to or from North Korea. The regime has heavily relied on the shady transactions after the UN Security Council passed stringent sanctions last December that drastically limit the amount of petroleum North Korea can import every year.

South Korea’s Foreign Ministry didn’t release its usual statement that it “welcomed” more sanctions on Pyongyang. An official who spoke on the condition of anonymity only went as far as saying on Sunday that the UN’s additional blacklist was the “international society’s show of will to faithfully implement UN Security Council resolutions against North Korea.”