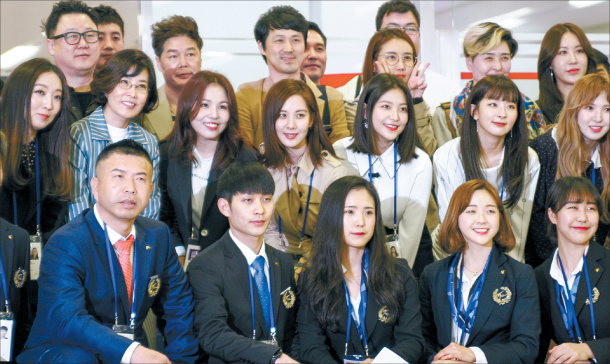 Members of the South Korean group of K-pop idols, musicians and taekwondo athletes, including girl group Red Velvet and Seohyun, a member of Girls’ Generation, pose after arriving at Pyongyang’s Sunan Airport on Saturday for a pair of concerts this week. On Sunday, the musicians performed at the East Pyongyang Grand Theatre. [NEWS1]

K-pop idols and rockers hit the stage in Pyongyang on Sunday in the first performance by South Korean musicians in the North in 13 years.

The 11 different groups performed an eclectic mix of contemporary K-pop and ballads that were more popular during the 1980s and ’90s. The musicians include legendary singer Cho Yong-pil; girl group Red Velvet; Seohyun, a member of Girls’ Generation; YB, a five-member band; Kim Kwang-min, a pianist; and rock star Kang San-ae.

The concerts are a response to the North’s performances in the South two months ago right before and during the PyeongChang Winter Olympics.

There are almost 190 delegation members, including a 22-member taekwondo team, 10 journalists and 20 government officials along with support staff and technicians.

They are led by the South’s Minister of Culture, Sports and Tourism Do Jong-hwan.

Two concerts were planned for the trip. 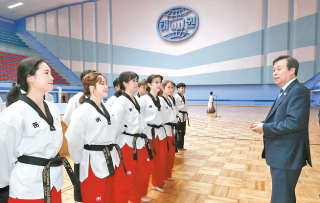 The performance was originally scheduled for 5:30 p.m., but the South’s Culture Ministry said the North asked to postpone the concert to 7:30 p.m. “so that more people can enjoy the concert in the North.”

The starting time for the concert was rescheduled once more to 6:30 p.m. “under the agreement between the South and the North,” according to the Culture Ministry.

The second concert, featuring performers from both countries, is set to take place Tuesday at the Ryugyong Jong Ju Yong Gymnasium, which seats 12,000.

The South’s taekwondo team performed at the Taekwondo Hall in Pyongyang on Sunday. It is scheduled to rehearse today with the North’s team for a joint performance on Tuesday at the East Pyongyang Grand Theatre.

The troupe traveled on a chartered civilian flight and landed in Pyongyang around 11:30 a.m. on Saturday.

They were welcomed at Pyongyang’s Sunan Airport by Pak Chun-nam, head of the North’s Culture Ministry, and Hyon Song-wol, leader of its Samjiyon Orchestra. Hyon led a 120-member troupe to the South in February for two concerts in Gangneung and Seoul during the PyeongChang Winter Olympics.

“Welcome to Pyongyang, we are eager to see you here,” Hyon said. “A lot of famous singers have come … and you have all prepared your best. We have been waiting for you.”

“April is a meaningful month in Pyongyang,” Pak said. “It’s a beautiful season and I think the South’s delegation has come at a happy and joyful time.”

Many South Korean artists expressed excitement upon arriving in the North.

“We cannot believe that we are here,” said Lee Yoon-sang, a singer-songwriter and record producer directing the concerts. “We are looking forward to performing well and leaving a good impression.”

“I am excited to be back,” said rock singer Yoon Do-hyun, who leads the band YB. “The last time I was here was in 2002. I am keen to see if and how the audience’s reaction to the performances is different from back then.”

The last time a South Korean musician visited the North for a performance was in 2005, when singer Cho Yong-pil held a solo concert in Pyongyang.

The first time that K-pop stars performed in the North was in 1999, when girl group Fin.K.L and boy band Sechs Kies, among the earliest idol groups, visited Pyongyang for a joint concert. Both groups kept their outfits conservative - Fin.K.L members performed in long, dark dresses, and Sechs Kies wore long-sleeve jackets and wide pants.

“The South-North exchanges of sports and culture that began during the Olympics have now led to the inter-Korean summit and even to the U.S.-North summit. So I think the role that these exchanges play is very important,” Do, the South’s culture minister, said in a press conference with South Korean journalists on Saturday at the Koryo Hotel in Pyongyang. “I hope that we will be able to bring back the sense of being one people through these exchanges.”

Do said that he will discuss the possibility of restarting work on an inter-Korean dictionary and archaeological investigations in Kaesong, North Korea, with his counterparts. The culture minister said the projects came to an end 2015 after the Kaesong Industrial Complex was shut down.

“I also intend to suggest that the two Koreas cooperate on the Asian Games in August in Indonesia,” Do said.

It is not yet known whether the North’s leader, Kim Jong-un, will attend the concert on Tuesday.

“When the Samjiyon Orchestra performed in Seoul, our president was there,” Do said. “So maybe something similar may happen here. But I have not been given any information on this.”