A new piece by Kang Yo-bae, “Ruthless” (2017) is part of the “Post Trauma” exhibition at the Jeju Museum of Art. The exhibition, which commemorates the 70th anniversary of the Jeju Massacre, runs until June 24. [JEJU MUSEUM OF ART]

This year marks the 70th anniversary of the Jeju Massacre on April 3, 1948, and a number of museums and galleries have taken the opportunity to remember the tragedy with exhibitions. The Jeju Museum of Art (JMOA) has organized an exhibition on the island, while six other exhibitions are taking place in galleries across Seoul. The National Museum of Korean Contemporary History (MKCH) in central Seoul is also putting on an exhibition themed on the Jeju Massacre.

The Jeju Massacre occurred in 1948, the year when the two Koreas officially became divided through two separate presidential elections. A group of insurgents on the island attacked local police stations on April 3 to protest the presidential election as well as the U.S. base in Korea. A total of 3,000 people died in the initial government crackdown, with as many as 20,000 people dying over the following seven years until September 1954.

This year marks the 70th anniversary since the first round of bullets was fired, and the island of Jeju will be taking the chance to remind the Korean people of the tragedy and tell their side of a story that has so often been one-sided in the past.

The uprising is commonly referred to as “Jeju 4.3” in Korean, without any specific reference to its nature. It is either completely omitted from school textbooks or mentioned in a mere paragraph or two - the people of Jeju rose up against the nation when it chose to initiate its first presidential election separately from the North.

“According to research, only 65 percent of the Korean population are aware that such a thing happened,” explained Gim Jun-gi, director of the JMOA. “It’s commonly said that the communists went against the government, but that’s not true. What the people of Jeju were fighting for was a single administration that would govern the whole Korean peninsula, not two. It was a boycott against a South-only election, not the nation itself.”

The JMOA will hold “Post Trauma,” a special exhibition about the uprising, in Jeju as well as six different exhibits under the theme of “Sleepless Namdo” in Seoul, both of which feature artworks that depict the scarred memories of the massacre, console the hearts of the victims and attempt to overcome the traumatic experience through philanthropic peace.

Some 226 pieces of work including fine art, sculpture, sketches, photos and videos will be on display at JMOA until June 24, each showing how state-driven massacres, not only in Korea but across East Asian countries, have left people wounded, and how artists strive to heal themselves. Some famous names include Korean artist Kang Yo-bae, Chinese sculptor Wu Weishan, Taiwanese sculptor Peng Hung Chih and Japanese sculptor Kinjo Minoru, who have illustrated different massacres from modern and contemporary history such as the Nanking Massacre in 1937 or the Gwangju Democratic Uprising in 1980. 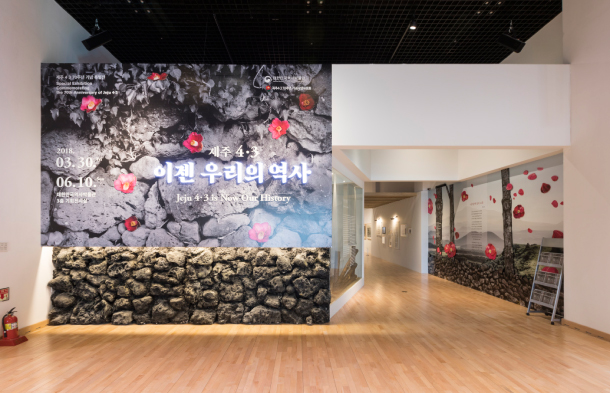 “The Jeju 4.3 Massacre should be dealt with as a social issue, not a political one. It should be viewed as a massacre toward the people, and it should lead to a future in which human rights and peace are given at the foremost value,” said Gim.

While the exhibit by JMOA focuses more on the artistic depiction and sublimation, “Jeju 4.3 is Now Our History,” held at MKCH until June 10, takes a more factual approach. The exhibition features some 200 recorded files based on the “Report on the Truth-finding Investigations of the Jeju 4.3 Incident” adopted by the government in 2014, historic artifacts, personal belongings and art works created by different artists.

Some notable art includes oil paintings by artist Yang Mi-kyeong. “Big Wide Coffer-Long Hands” and “Ways for Children to Fight” are some of her pieces that portray scenes of victims, including children, hiding from Japanese troops.

The exhibition also includes nine files that have been disclosed to the public for the very first time, provided by the National Archives of Korea. The documents include court-martial records from December 1948 and July 1949, and the proclamation document of martial law in Jeju Island on Nov. 17, 1948 - both of which are evidence that the massacres were approved by the state. The original files will be put on display until April 10, and replaced with replicas from then on.

“We wanted to break the prejudice of people thinking the Jeju April 3 Massacre is just Jeju’s story. This was a big tragedy in Korean history and I hope that [with this exhibition], people will begin to understand and honor the memory of Jeju April 3,” said Lee Myoung-ju, curator of the exhibition.