The power of truth

The power of truth 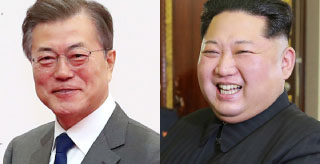 “If North Korea makes a specific move for denuclearization, the South Korean government can ask China, the United States and the [UN] Sanctions Committee to ease sanctions,” Yonsei University Prof. Moon Chung-in said a few days ago. I interpreted the remark in the opposite way. “If the North’s move is not specific about denuclearization, international sanctions must be bolstered,” I thought.

It is time to show Kim Jong-un the reality, not a sugarcoated entreaty. In the past, Professor Moon, a special adviser to the president on foreign, security and unification issues, has created confusion with his careless and irresponsible remarks, such as “A war must be prevented even if it will cost the Korea-U.S. alliance.” President Moon Jae-in, who is preparing for a summit with Kim at Panmunjom on April 27, must not take Professor Moon’s remarks too seriously.

Instead, President Moon must sit down for the summit with a determination to challenge and raise his voice against Kim as the representative of a country who protects the self-esteem and interests of 50 million people, not simply a spokesperson of the liberal group in our society. At Panmunjom, the two leaders will discuss North Korea’s nuclear weapons as part of their key agenda, a major difference from the first summit between Kim Dae-jung and Kim Jong-il in 2000, and another between Roh Moo-hyun and Kim Jong-il in 2007.

In the two previous summits, the two South Korean presidents kept their silence toward Kim Jong-il’s argument that the nuclear issue has nothing to do with the South and that it is an issue to be resolved with the United States. This time, Moon must make his stance clear.

Moon’s somewhat confusing view toward the North Korean nuclear issue is worrisome. In his interview with CNN on Sept. 14, Moon said, “The North’s nuclear development is to guarantee the security of its regime.” But in a conference on Jan. 10, he said, “But the South is feeling threats from the North’s nuclear weapons and missiles. Denuclearization of the Korean Peninsula is our fundamental stance that can never be conceded.” It is unclear if he really understands the North’s nuclear program or he won’t allow it. Ambiguity damages negotiating power.

From Kim Il Sung to Kim Jong-un, the goal of the three-generations of North Korean leaders has always been the communization of the South. Nuclear and missile programs to attack the United States and Japan are only a means to prevent them from attacking. North Korean nuclear weapons are first and foremost to control the South.

The North’s true nature can be accurately seen when the South is called the primary victim and the United States the secondary victim. Therefore, Moon must demand Kim Jong-un remove his short-range nuclear missiles targeting various cities in the South, not the inter-continental ballistic missiles that the United States is worrying about.

Kim used to say that the North’s nuclear arms are the life of the Korean people and national treasures of a unified Korea. At the upcoming summit, he will wear a cold smile on his face and make a subtle threat by saying that “our nuclear weapons are the mutual strategic assets of the two Koreas, and they are not targeting the Korean people. Why would we build nuclear arms to take over the South, a small territory just in front of us?”

Then, Moon must change his face and sternly counter by saying, “Nuclear arms are primarily targeting the South. The South Korean people will not tolerate it.”
For the South, there is nothing stronger than the truth if we really want to counter North Korea’s nuclear stockpiles. A false theory of peace, which promotes that a nuclear-armed North and a nuclear-free South can live happily together, is rapidly spreading in the South. President Moon must demonstrate the power of truth.