Couples buy before they marry

Couples buy before they marry 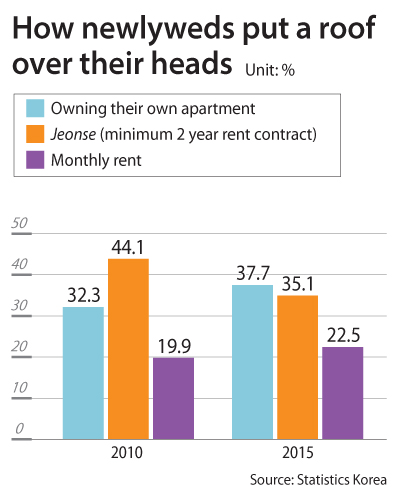 More Korean couples are ditching the jeonse (long-term rental deposits), and waiting until they own their own homes to tie the knot.

According to a study from Statistics Korea released on Monday, of couples who were married for a year or less, 37.7 percent owned their own homes as of 2015, an increase from 32.2 percent in 2010.

Newlyweds paying for jeonse, were 35.1 percent, down from 44.1 percent five years ago.

This is the first time that more newlyweds own their own homes than use jeonse, and the trend also applied to couples married for five years or less.

“The past trend of getting married first and buying an apartment afterward has changed to getting an apartment to live in first before getting married,” said Park Si-nae, the statistics agency official. “There’s a growing trend among young people where they are either postponing their marriages or giving up until their housing problems are resolved.”

Park said the parents of young couples today, baby boomers born between 1955 and 1963, are stable financially and can often help their children buy a home when they get married. This is contributing to more couples buying homes rather than starting out in a rental apartment.

The study found that married people living outside the Seoul metropolitan area in regions where real estate is cheaper were more likely to own their own homes.

Of couples married for less than five years living outside of the Seoul area, 52.8 percent owned a home. The same figure drops to 31.3 percent for those living in Seoul, Incheon and Gyeonggi.

Not surprisingly, the longer couples were married, the more likely they were to own their own homes. Over 76 percent of couples married for more than 35 years owned their own apartments. Second among age brackets were those married for between 20 and 34 years, with a 67 percent homeownership rate.

Luna, Kwon and all things Terraform