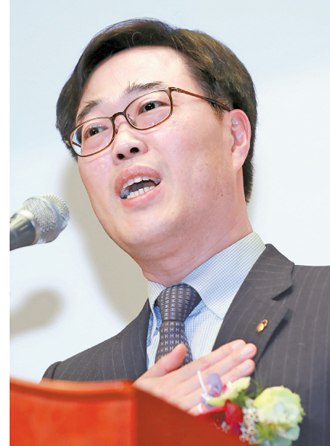 Kim Ki-sik, the new governor of the Financial Supervisory Service, speaks during his inauguration ceremony on Monday at the watchdog’s headquarters in Yeouido, western Seoul. [YONHAP]

Kim Ki-sik, a former lawmaker and civic activist, officially took office as governor of the Financial Supervisory Service (FSS) on Monday. His appointment has raised a number of concerns.

“The FSS is in critical circumstances,” Kim said during his inauguration ceremony on Monday at the watchdog’s headquarters in Yeouido, western Seoul. The FSS, he said, must regain the trust of the public and the market.

One of the main concerns over his appointment is whether he will push for a dramatic reform of the financial sector and further regulate the market as he did as a lawmaker and member of a liberal civic organization.

“I think I had a role to assume as a lawmaker in an opposition party and as a civic activist,” Kim told reporters Monday after his inauguration ceremony, in an attempt to address concerns about his appointment. “Now I have a specific role as the governor of the FSS and will act accordingly.”

Despite his attempt to quell the concerns, Kim’s past offers many clues to the direction of his reforms.

One of the policies Kim pushed for as a lawmaker was lowering the maximum interest rate lenders could charge. The current maximum rate stands at 24.9 percent.

As a lawmaker, Kim also opposed the approval of internet banks, saying it “disregards the essence of the banking act and destroys a large principle.”

The family-run conglomerates known as chaebol are another likely target for Kim.

Along with Jang Ha-sung, the currently policy chief at the Blue House, and Kim Sang-jo, chairman of the Fair Trade Commission, with whom Kim worked as an activist, the trio are considered “chaebol snipers,” or critics of Korea’s family-run conglomerates.

As a lawmaker, Kim proposed and passed a bill to strengthen the governance structure at financial companies, in particular assessments of competence at financial holding companies.

In his Monday speech, Kim said the FSS must be “consistent and predictable” in its supervisory activities to “secure trust,” indicating that no favors will be given to conglomerates.

But one particular concern raised among market insiders is whether Kim is qualified to head an entity that monitors and supervises the entire financial market in Korea.

Kim’s background in the financial industry is limited to a stint as a member of the National Policy Committee in the National Assembly.

“Back when he was on the policy committee, he often suggested reforms or regulations that did not take the situation of banks into consideration,” an industry insider told the JoongAng Ilbo.

As a lawmaker, he was critical of the so-called “Mofia,” a portmanteau of MOF (which stands for the Ministry of Finance) and the mafia. The term is meant to be critical of former bureaucrats from the Finance Ministry who assume important positions in local businesses and the financial sector and yield influence.

During a 2014 parliamentary hearing, Kim branded Choi, who comes from a bureaucratic background and had a long career at the Ministry of Finance, as part of the “Mofia.”

“Policy and supervision must go hand in hand with the big picture,” Kim said on Monday. “But a coin has two sides and a policy-making agency and supervisory agency clearly have distinct roles. Supervisory principles must not be distorted by a political or policy-related agenda.”