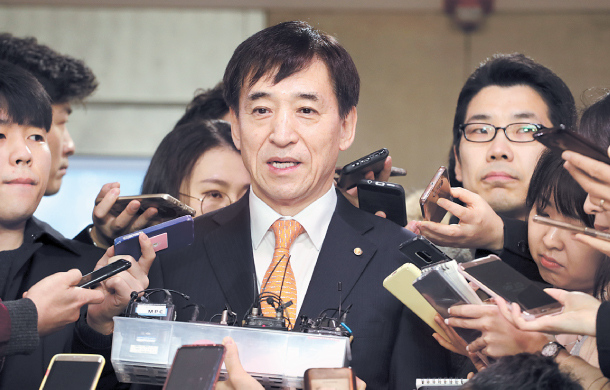 Korea’s central bank chief said Monday that the country’s monetary policy tools will be used to support the economy and maintain financial stability at the same time.

“It is necessary to manage monetary policy in such a way as to make the financial system more stable and help the momentum for recovery,” Bank of Korea (BOK) Gov. Lee Ju-yeol said in an inaugural ceremony for his second four-year term. He was reappointed by President Moon Jae-in last month.

“The central bank will keep the accommodative stance to support the economy, but will be more cautious in adjusting the pace of monetary easing after closely checking changes in the economy and financial stability.”

He said the BOK will remain more vigilant in fending off potential financial risks, which include massive household debt and foreign capital outflow.

Lee, who became the first BOK chief in more than 40 years to serve in the top BOK post for a second consecutive term, noted that it is time to look for ways to improve the effectiveness of the central bank’s monetary tools in a period of low growth and low interest rates.

“As we face a drop in growth potential and limited maneuverability of the base rate, the central bank needs to seek ways to take policy initiatives for the mid- and long-term,” he said. “For the last four years, I’ve put a priority on stability, but for the next four years, I will focus more on change and innovation.”

Lee stressed the central bank has complied with the principle that market forces determine foreign exchange rates, referring to the latest Seoul-Washington deal to improve the transparency of the country’s currency market.

“I understand claims that Korea has too much current account surplus, which once was equivalent to 7 percent of gross domestic product,” Lee told reporters. “But we’ve never used our policy tools to target foreign exchange rates. We’ve stuck to the principle that the foreign exchange rate should be determined by the market.”

For years, Washington has vowed to aggressively keep tabs on and combat unfair currency practices, which have resulted in the United States having a large trade deficit.

Korean financial authorities, however, have claimed they do not interfere in the foreign exchange market but limit themselves to “smoothing operations” against extremely one-sided movements.