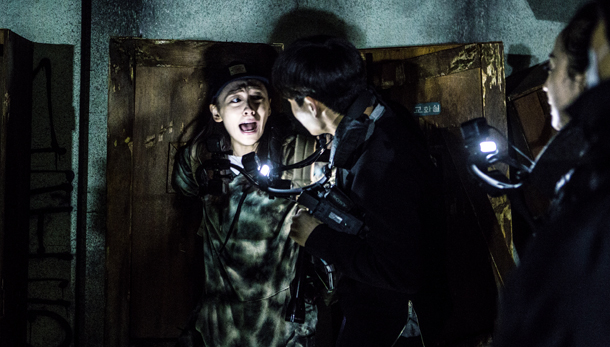 “Gonjiam: Haunted Asylum,” directed by Jung Bum-shik , who helmed the award-winning horror flick “Epitaph,” featured rookie actors in all its main roles. The film sold 983,000 tickets at 1,124 screens, accounting for 40.3 percent of the weekend’s ticket sales. Since it arrived at theaters on Wednesday, the film has sold 1.37 million tickets. Made for only 2.4 billion won ($2.28 million), “Gonjiam” easily surpassed its break-even point of 700,000 tickets.

Set in a psychiatric hospital in Gyeonggi that CNN Travel called one of the “Seven freakiest places on the planet” in 2012, “Gonjiam” revolves around a group of young people who experience true terror while broadcasting their journey in the asylum at night.

Spielberg’s latest feature, which arrived in Korea only a month after his Oscar nominee “The Post,” sold 742,000 tickets at 1,058 screens from Friday to Sunday, making up 33.6 percent of the entire weekend ticket sales. “Ready Player One” is awash in 1980s references from Van Halen to Ferris Bueller. It neared a million ticket sales as of Sunday after it opened in Korea on Wednesday.

Based on a popular 2011 sci-fi novel by Ernest Cline, the nostalgia mash-up is set in the year 2045, where people escape the harshness of reality in an immersive virtual world called Oasis. The Oasis creator leaves his immense fortune and control of the virtual world to the winner of a contest that is designed to find him a worthy heir.

The romance “Be With You,” adapted from a Japanese novel, dropped to the third spot from last weekend’s second place, and last weekend’s box office winner “Pacific Rim: Uprising” slid to fifth place.

In fourth was “Seven Years of Night.” Starring Ryu Seung-ryong and Jang Dong-gun, the thriller sold 233,000 tickets over the weekend, leaving it with only 418,000 total ticket sales since it opened on Wednesday.

CJ E&M’s latest revenge film, which cost around eight billion won, focuses on a psychotic father’s quest to punish the man who killed his daughter in a car accident.