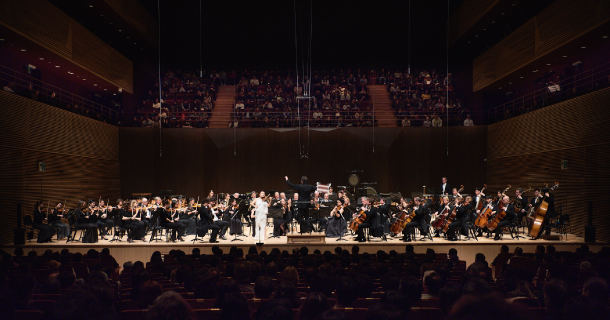 TONGYEONG, South Gyeongsang - The Black Box theater in this southern coastal city was the site of an ambitious East-meets-West concert set on a fashion show runway.

The organizer was the eminent Ludger Engels, who shocked fashionistas in 2013 when he collaborated with Vivienne Westwood on Semele Walk, a runway show set to Baroque opera. For his latest trick, the German virtuoso arranged a performance of Monteverdi’s “Il ritorno d’Ulisse in patria,” an Italian opera based on Homer’s “Odyssey,” combining Baroque and traditional Korean music.

The result is an unexpectedly beautiful harmony between two seemingly opposed styles of music.

The world premiere of Engels’ “Returning Home” on Friday at the Black Box, which abuts the Tongyeong Concert Hall, opened this year’s Tongyeong International Music Festival, one of the country’s largest events for Western classical music. The stage was a runway, and the sold-out audience was seated on either side, facing each other. In between them were two groups of artists, one in dark costume holding Baroque instruments and the other in hanbok (traditional Korean clothing) holding traditional Korean instruments. On stage, they switched between Baroque music and gagok, a genre of Korean vocal music that combines emotional and poetic lyrics with instrumental accompaniment.

Left: A scene from the world premiere of “Returning Home,” directed by Ludger Engels. Right: The Tongyeong Concert Hall, home of the Tongyeong International Music Festival, in South Gyeongsang. This year’s festival commemorates the return of Korean composer Isang Yun (1917-95) to his hometown. [KIM SI-HOON, YONHAP]

“It was a great adventure for me to combine these two styles of music,” Engels said. “I really got to know about gagok, and I felt that the more I hear gagok and Baroque music together, the lesser gap I felt between the two. In the end, it really became one style of music.”

Engels chose to open the festival with “Il ritorno d’Ulisse in patria,” which translates to “The Return of Ulysses to His Homeland,” because this year marks the return of Korean composer Isang Yun (1917-95) to his hometown of Tongyeong.

Yun was an advocate for Korean reunification and spent his early life opposing the Japanese during World War II. After the war, he traveled to Europe to study music. While living in Berlin during the 1960s, he came in contact with North Koreans, and his interactions with them led the South Korean secret service to believe he was a spy. 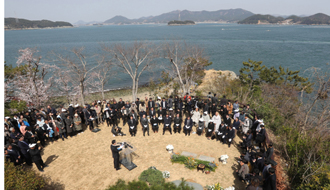 Yun’s family and friends attend his burial ground relocation ceremony on a cliff next to the Tongyeong Concert Hall on Friday. [TONGYEONG INTERNATIONAL MUSIC FESTIVAL]

He was forcibly taken to South Korea, where he was tortured, threatened and sentenced to life in prison. A petition signed by over 200 artists around the world forced the South Korean government to release him, and in 1969, Yun was freed. He returned to West Germany, where he obtained citizenship and passed away in 1995. He never returned to South Korea in his lifetime.

Upon the request of his wife Lee Su-ja, Berlin decided to return Yun’s ashes to Korea this year. On Friday, a repatriation ceremony took place on a cliff overlooking the sea next to the Tongyeong Concert Hall. A group of conservatives protested the ceremony, saying a “commie should not be buried in Tongyeong.”

“It’s a pity to see an acclaimed composer receive such harsh treatment from his own people,” said Marie Lehmann, an attendee from Germany. “But I’m certain that with time, more and more Koreans will come to appreciate his music and acknowledge his brilliance.”