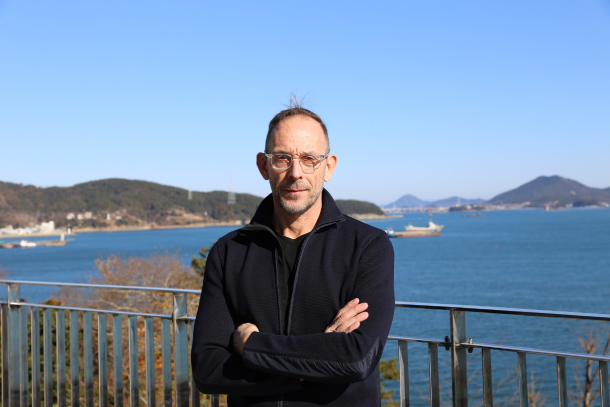 German director Ludger Engels’ new music theater “Returning Home” had its world premiere on Friday at this year’s Tongyeong International Music Festival. Commissioned by the festival, Engels was asked to create a piece to fit this year’s theme, “Returning Home,” marking the homecoming of Isang Yun’s ashes to Tongyeong after 23 years. Instantly, Engels thought of Monteverdi’s opera “Il ritorno d’Ulisse in patria,” also known as “The Return of Ulysses to His Homeland.”

But this is no ordinary opera. Engels’ interpretation is music theater, a relatively new genre in the performing arts that combines contemporary music and theater in a way that is distinct from traditional opera.

Engels’ production not only commemorates the return of Yun’s ashes, but also shows his creativity in fusing Western classical music with traditional Korean sounds. The director opted to combine Baroque music and gagok, a genre of Korean vocal music.

The Korea JoongAng Daily sat down with Engels for an interview at the Tongyeong Concert Hall last week.

Q. What did you feel after watching the world premiere of your new piece?

A. It was full of tension and very emotional. I got very good responses. They said that it was extremely intensive and that they feel involved in the piece. That’s because instead of sitting in front of the stage, simply watching the performance, they become members of the story. I also heard from the audience that they were surprised how Monteverdi’s music harmonizes so well with gagok.

The stage is set up in the middle of the space with audience members sitting on either side, facing each other. What was your intension?

Some people say it was like a runway, but for me it’s more like the idea of sitting on a street or a beach. That’s why we had the pebbles on the stage. I simply wanted the audience to immediately become a part of the show and see the reactions of each other.

There’s a Korean pop song from the ’80s included in the performance. Why?

The song was suggested by one of the Korean musicians as the lyrics basically say the same thing as the story on stage. We wanted to add this more contemporary genre of music so the audience can realize that this theme of “Returning Home,” is in the old myths from centuries ago, in opera from the 16th century and in pop from the ’80s as well - that it always exists as we, human beings, always want to return home.