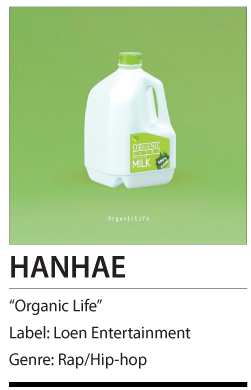 Previously a trainee for boy group Block B and a member of Phantom, Hanhae is currently preparing to drop his second solo album. He has gained recognition for his smooth rap style after his appearance on Mnet TV’s rap competition program, “Show Me the Money,” reaching the semifinals of season six.

The album’s green cover shows a carton of organic homemade milk. This is the second album that Hanhae has released in three years. As a singer-song writer, he produced all six of the songs, displaying his personal flair within the music. Several artists also contributed to the album: rapper Gaeko, Hani from girl group EXID, singer-songwriter eSNa, rapper Reddy and high-school rapper NO:EL.

“In My Dream” tells the story of a sentimental longing for a long-haired ex-lover. Hanhae stresses his feeling of being sorry and wishes that she would appear in his dreams. Gaeko, whom Hanhae worked with for Season 6 of “Show Me the Money,” featured as a vocalist, elevating the song’s unique melody. This song has an addictive, dreary melody.