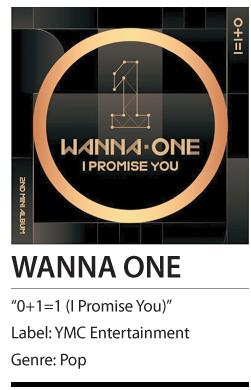 Love can make you blind, but as it turns out, it can’t make you deaf. It’s usually the case that songs by big-name groups top online music charts for days after their release, but not Wanna One’s latest track “Boomerang” from their album “0+1=1 (I Promise You).”

Fans’ hopes were high for the latest album, especially after they heard “I.P.U.,” which was pre-released. The ballad-like EDM track proved a successful harmony of all the boys’ charming voices and intermittent rap, throughout which they sang their love and gratitude for fans.

Yet it’s been less than two weeks since “Boomerang” was released on March 19 and the song has fallen a long way down the charts.

Fans thought that the lead track was going to be an EDM song, but not this kind of old-school EDM with an awkward melody, even more awkward lyrics and downright incomprehensible beat.

If you’d like to keep your love for the group intact, try a different song. If you’ve startled yourself with “Boomerang,” calm yourself down with “I.P.U.,” “Gold” or “I’ll Remember.”