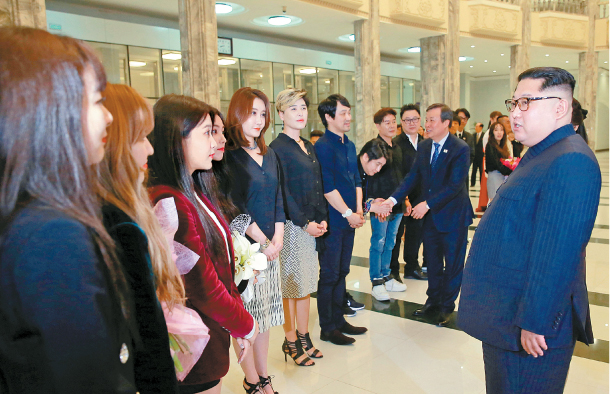 North Korean leader Kim Jong-un, right, greets Red Velvet on Sunday night at the East Pyongyang Grand Theatre after the girl group performed in a two-hour concert in the North Korean capital with 10 other South Korean groups. A second concert with joint performances with North Korean artists will be held this afternoon at the Ryugyong Jong Ju Yong Gymnasium in Pyongyang. [YONHAP]

North Korean leader Kim Jong-un made an unannounced appearance at a concert thrown by South Korean artists Sunday night in Pyongyang, and said the two countries should hold another joint concert this fall in Seoul.

“Tell President Moon how wonderful this is,” Kim told South Korean government officials during the two-hour concert, according to pool reports distributed by South Korea’s Unification Ministry, which handles relations with the North. “Thank you for this gift to our Pyongyang citizens.”

It was the first time a North Korean leader personally attended a South Korean concert, and Kim showed up with his wife Ri Sol-ju at the East Pyongyang Grand Theatre. The last time a South Korean artist performed in the North was in 2005, when Cho Yong-pil held a solo concert in Pyongyang.

Sunday’s concert, entitled “Spring Comes,” was a reciprocation for two performances by North Korea’s Samjiyon Orchestra in February on the eve of the PyeongChang Winter Olympics in Gangneung, Gangwon, and during the Games in Seoul.

A second concert with the same South Korean line-up is scheduled to be held this afternoon at the Ryugyong Jong Ju Yong Gymnasium in Pyongyang, which will include joint performances with North Korean artists.

Eleven groups from South Korea took to the stage Sunday night, performing an eclectic mix of K-pop and ballads from the 1980s through the present day. The musicians, who arrived in the North Korean capital on Saturday by a chartered civilian flight, included girl group Red Velvet; Seohyun, a member of Girls’ Generation; YB, a five-member rock band; Kim Kwang-min, a pianist; and legendary singer Cho Yong-pil.

South Korea’s Culture Minister Do Jong-whan, who watched the show with Kim from a second floor balcony, said the North Korean leader showed “keen interest” in the songs and lyrics, although he didn’t cite any specific title.

According to pool reports, the North didn’t attempt to change any of the lyrics or dance moves and the 1,500-seat hall was completely full. Whether Pyongyang authorities would make any demands was a matter of debate in South Korea’s media because the general public in North Korea is strictly banned from listening to K-pop. When caught, they can be sent to prison camps.

It is not clearly known who in Pyongyang was allowed to attend the Sunday concert, though North Korean authorities were said to have chosen the audience from a lottery with special emphasis on the socially disadvantaged, similar to South Korea’s process for the two North Korean concerts last February.

An official from the Unification Ministry said it was not known whether the North will air a recorded version of the show on its TV network, though a five-minute summary was shown Monday afternoon on the North’s Korean Central Television.

Only one song was featured in the report, the finale, “Our Wish is Reunification.”

In the South, the Sunday show will air in its entirety on local channel MBC this Thursday at 7:55 p.m.

A South Korean government official who spoke with pool reporters in Pyongyang Monday did say, however, that Seoul authorities wanted to add rapper Psy, best known for his worldwide hit “Gangnam Style” to the roster but were rejected by North Korean officials, who said Psy would “stand out” too much.

BTS was also an option, said the source, but the seven-member boy group was busy.

A comment from Kim that raised eyebrows in the local media was that he originally planned to attend the second concert this afternoon but “adjusted” his schedule to see the first one on Sunday.

In an article occupying the entire front page of North Korea’s state-run Rodong Sinmun Monday, the newspaper quoted Kim as saying he “may have no time” due to his “complicated political program early in April,” according to an English version of the report. Baik Tae-hyun, spokesman of the Unification Ministry, said Monday that the South Korean government was unaware exactly what Kim was referring to.

The North is planning to hold a major parliamentary meeting on April 11, in which the country’s rubber-stamp parliament, the Supreme People’s Assembly, usually makes critical decisions on spending, legal revisions and personnel reshuffles at state organs.

The Day of the Sun falls on April 15, when North Korean founder Kim Il Sung, Kim Jong-un’s grandfather, was born in 1912. April 25 is when the regime celebrates Kim Il Sung’s establishment of the Korean People’s Revolutionary Army in 1932 to fight Japanese colonial rule of the Korean Peninsula.

Kim Jong-un will have his first face-to-face discussion with President Moon Jae-in on April 27, when the two leaders will meet for the third inter-Korean summit near the border on South Korea’s side of the truce village of Panmunjom.