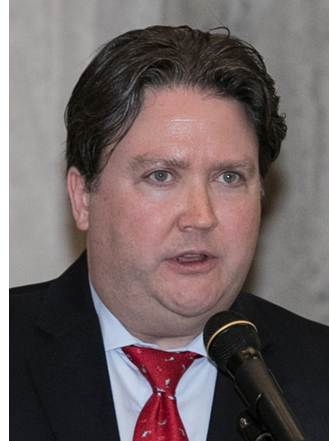 Rather than adopting previous models used to dismantle weapons of mass destruction programs in other dictatorial regimes, Washington and Seoul have to work together to come up with a new approach best suited for the situation in North Korea, said Marc Knapper, U.S. acting ambassador to Korea, in a forum in Seoul Monday.

Knapper underscored Washington’s willingness to engage with North Korea but said its purpose first and foremost is the complete, verifiable, and irreversible dismantlement (CVID) of Pyongyang’s nuclear and missile programs, and that this is “necessary and non-negotiable.”

Speaking at a panel hosted by the Korean-American Club at the Korea Press Center, Knapper called North Korean leader Kim Jong-un’s first visit to Beijing since taking power, his meeting with Thomas Bach, president of the International Olympic Committee, and his greeting in person of artists from South Korea on Sunday - all over the course of one week - “remarkable.”

“The more contact with the outside world, the frankly the better, so we are pleased that Kim Jong-un made that journey to Beijing,” he said.

He also weighed in on what is being called Kim Jong-un’s “phased, synchronized” approach to denuclearization, mentioned in his talks with Chinese President Xi Jinping.

“We need to sit down directly with the North Koreans and discover what is their intention,” he said.

“When they say security guarantee, what do they mean by this? In the past, of course, this has been withdrawal of U.S. forces from South Korea, which is of course unacceptable.”

He added this “underlines the importance of” the North-South summit this month and the subsequent summit between Kim and U.S. President Donald Trump to hear directly from the North what it means by a phased, or stage-by-stage, approach.

“But the bottom line has been, and is, and will remain, until we sit down, CVID. We can’t accept anything less,” Knapper said.

While he did not elaborate on the U.S. negotiation strategy with North Korea, Knapper warned not to “read too much” into various reports, such as those suggesting the Libya model, adding, “All of these are being put out there by those who are not connected to the process.”

The Blue House last week indicated that the denuclearization framework used with Libya in 2003 - which resulted in the disposal of weapons of mass destruction by the Muammar Qaddafi regime in return for sanctions relief from the international community - could not be applied to North Korea.

“I will say that each situation is unique,” said Knapper. “In the case of Libya we had a country that was on the verge of full scale civil war… there were many things going on that really are not relevant to the North Korea case. I think that the North Korea case is really going to require the U.S. and South Korea to put our heads together to come up with an approach that is best suited for the situation in the North.”

Knapper said that it is “significant” for the United States that Kim Jong-un, through Chung Eui-yong, South Korea’s national security adviser, and Chinese President Xi, conveyed that he was “committed” to a process of denuclearization.

He said that “preparations are under way” for the U.S.-North Korea summit, but that because of its “sensitive” nature, he could not elaborate further other than that the U.S. Embassy in Seoul is “very involved in terms of coordinating” with South Korean officials.

On Kim and Xi’s summit, Knapper said Beijing can “do more,” but that “Chinese actions to try to play a positive role don’t constitute interference and certainly don’t constitute weaken U.S. leverage.”

Trump appeared to link a bilateral trade agreement with Seoul to the North Korea denuclearization issue, calling it “a very strong card” in a speech in Richfield, Ohio, last week.

“I think that President Trump feels very strongly that our two countries have free and fair trade,” said Knapper on this controversial remark.