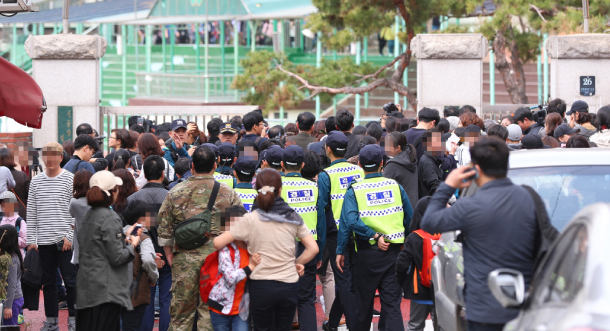 Parents and police officers wait for dismissal at Seoul Bangbae Elementary School in southeastern Seoul on Monday after a girl was held hostage by a man at the school earlier in the day. The school allowed children to leave at about 1 p.m. after police arrested the man. [YONHAP]

The man, surnamed Yang, held the fourth grader hostage with a 15-centimeter (6-inch) knife at the teachers’ office on the first floor at around 11:47 a.m. He demanded the school’s security “call reporters” because he wanted to reveal grievances he had with the military.

“I became schizophrenic due to the cruel treatment, verbal abuse and threats I got during my military service,” Yang told reporters upon arrving at the Bangbae police station. “After I was released, I constantly sent requests to the Ministry of Patriots and Veterans Affairs for compensation, but they never gave me any compensation.”

When Yang held the girl hostage, a security guard called the police. Officers tried to calm Yang down for close to an hour. Because it was around lunch time, police offered him bread and milk, which Yang agreed to take, but suddenly showed signs of an epileptic seizure, police said. Officers used the opportunity to pin Yang down and arrested him at about 12:43 p.m.

To gain entrance, Yang told school security guards that he had come to pick up his graduation certificate and walked in through the front doors, according to a source from the school. He was not asked for any form of identification.

Upon entry, Yang proceeded to the teachers’ office, where six students were receiving materials for a class meeting during their break. Yang quickly grabbed one of the girls and held a knife to her throat, police said. They believe Yang did not have any ties with the girl.

After Yang was arrested, the girl was taken to an emergency room at Chung-Ang University Hospital in Dongjak District, about 9 kilometers (5.6 miles) from the school, and was released at about 3 p.m. later that day.

“Thankfully, she does not have any physical injuries and isn’t showing any other symptoms,” Hong Joon-young, the doctor in charge of the patient, told reporters outside the hospital at 2:20 p.m.

Hong said he did not ask her any specific questions about the incident because “that by itself may cause her stress and be a trigger.” Although the girl did not look noticeably nervous when she first arrived at the hospital, Hong said she would need to undergo further psychiatric examinations to see if she will be mentally stable at school.

Yang told reporters that he felt sorry about what he did after his arrest.