Brazilian striker Marcos Vinicius Amaral Alves, commonly known as Marcao, played a crucial role last year in getting Gyeongnam FC promoted to the K League 1. Apparently undaunted by the move to the top league, Marcao is in the midst of the action as Gyeongnam dominates the top league at the start of the season. 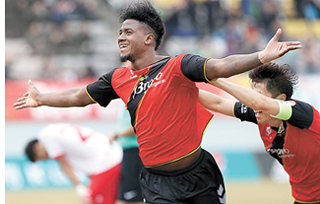 Marcao celebrates after scoring his second goal during a K League 1 match against Sangju Sangmu at Changwon Football Stadium in South Gyeongsang on March 4. [YONHAP]

On Sunday, during Gyeongnam’s game against Gangwon FC, Marcao scored two goals to lead the team to a 3-1 victory. The win takes Gyeongnam to four consecutive victories since the start of the season, putting it firmly at the top of the league.

Standing at 1.96 meters (6 feet 5 inches), Marcao has developed into a dominant striker, showing great speed and flexibility on the field. In the four matches Marcao has played this season, he has made 16 attempted shots, with eight on target and six hitting the back of the net. During the 2017-18 season, Marcao was the leading scorer in the K League 2, scoring 22 goals. He currently leads the K League 1 in scoring.

Gyeongnam’s unlikely Cinderella story has taken the league by surprise. The team, which was expected to head straight back down to the K League 2 at the end of the season, has already defeated Sangju Sangmu, Jeju United, Jeonnam Dragons and Gangwon FC.

Marcao started his athletic career as a basketball player, and it wasn’t until he was 17-years-old that he started playing football to help his mother financially after his parents separated. Receiving 540 Brazilian real ($163) a month, Marcao joined Ituano FC, a Brazilian football team in Sao Paulo. Having showed great improvement year by year, Marcao caught the eyes of a Gyeongnam scout at the beginning of last year and achieved his dream of playing in a foreign league.

Though it took Marcao a while to find his feet, he quickly became a key part of the Gyeongnam team.

“When Marcao first joined [the club], he played football like basketball,” said Gyeongnam head coach Kim Jong-boo. “He jumped for headers like he jumps for a dunk shot. So I fixed every detailed movement. He definitely has the talent. He certainly has the potential to become a scarier player.”

And Marcao responded to Kim’s hard work, refusing the ludicrous offers he received from Chinese football clubs. Upon completion of last season, Marcao received offers worth about a billion won ($950,000) with a four billion won transfer fee, but he declined right away.

“Gyeongnam gave me an opportunity when I wasn’t worth much as a player,” Marcao said. “Now that the team achieved its dream of getting promoted to the [K League] 1, I can’t let go of Gyeongnam. If I have to leave the team someday, I want to give them a big transfer fee.”

“Super League clubs that are ranked in the middle to bottom of the standing or teams in the second division are paying close attention to Marcao,” said a source close to the Chinese football transfer market. “Currently, his bidding price is above five billion won. If [Marcao] continues to play well, there’s a potential that his bidding price may increase up to 10 billion won.”

Gyeongnam will play against Daegu FC on Saturday, for their shot at extending their winning streak to five.