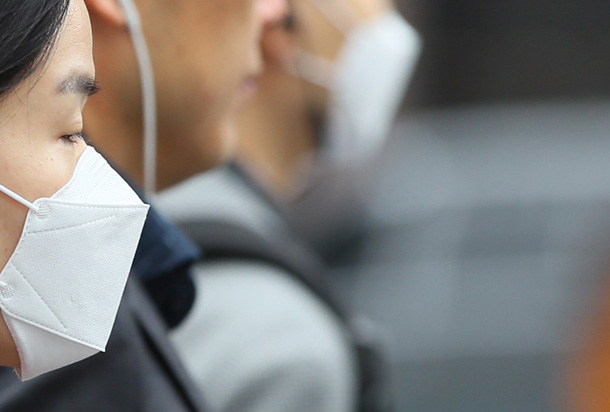 Wearing masks has become a daily routine for Seoul citizens especially in the spring season ?like on April 2, when weather authorities warned of bad air pollution mostly stemming from fine dust from China. [YONHAP]

The normal man-on-the-street’s attention was elsewhere last week when the local and international news was obsessed with North Korean leader Kim Jong-un’s surprise visit to Beijing. What average people were checking in the media or on their smartphones was the fine dust pollution level. The air quality in my neighborhood has been pretty rotten after hitting rock bottom on March 25. The pollution levels hovered around the three bottom levels of the eight-rank World Health Organization (WHO) air quality guidelines for particulate matter.

Everyone knows where the stifling yellow smog comes from. The Environment Ministry says 30 to 50 percent of the pollutants come across the Yellow Sea on normal days. On bad days, the figure is up to 80 percent.

Yet Seoul does not complain to Beijing. I am not the only one who is frustrated. Petitions calling for a government protest to China are pouring into a Blue House web page devoted to public complaints. By Monday afternoon, the number of complaints reached 220,000. One person wrote that partnering with China to combat the problem is like collaborating with a criminal on a crime. The writer called for an international criminal suit against China.

In his talks on Saturday with Chinese State Councilor Yang Jiechi, who came to Seoul to brief our government on the summit talks between Chinese President Xi Jinping and Kim Jong-un, President Moon Jae-in said that both Seoul and Beijing should address the pollution issue as many Korean people sincerely wanted cooperation between the two countries on the problem.

Even if the topic was not central to the meeting, such soft talk will hardly gain attention from Beijing. Yang was equally ceremonial, proposing to launch some sort of a cooperation center on environmental issues. The presidential office discussed fine dust at a regular Monday meeting, but failed to produce new measures.

Does that mean we have to live with imported pollutants? There have been many legal precedents that make neighboring countries accountable for air contamination. A recent action took place in Singapore.

Singapore suffered greatly from annual invasions of hazy smoke from the islands of Sumatra and Borneo, whose farmers and plantation companies set fire to forests to clear land for farming and the production of paper and palm oil.

In 2014, Singapore’s parliament passed the Transboundary Haze Pollution Act, which allows regulators to prosecute companies and individuals that cause severe air pollution in Singapore by burning forests in neighboring countries.

Authorities notified four Indonesian companies of a plan to levy fines for their burning of forests. When that did not stop the haze, they secured arrest warrants for the executives of the companies in 2016.

Companies and civilians joined in the effort. They carried out a boycott campaign against Indonesian papers and palm oil.

Frustrated Korean civilians have also attempted to take matters into their own hands. About 90 people filed a class action suit against the governments of Seoul and Beijing last May demanding compensation for the harm inflicted by the fine dust. But because of delays in administrating the action, a first ruling is set for next October.

Environmental activists that used to be harsh on China have turned quieter since a progressive government took office. They claim that they have eased their attacks on China because it is an uphill battle and that the Korean government could neglect its domestic obligations if it has to focus on overseas factors. But China must be asked to do its share if it is responsible.

If the government and environmental groups do nothing, we citizens need to stand up. Let’s not forget the Chinese stopped buying Korean products amid a diplomatic row over our deployment of a U.S. antimissile system.

There are many cases of boycotting foreign products for environmental protection. Consumers around the world shunned McDonald’s after learning the fast food chain contributed to the destruction of Amazon rainforest in 2006. If the state cannot do its duty, the people will have to take action.