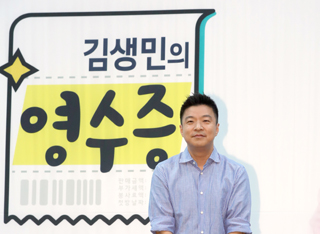 Comedian Kim Saeng-min has stepped down from all his programs, according to an official statement released by his agency SM C&C on Tuesday.

Production of “Kim Saeng-min’s Receipt,” the KBS2 show that was hosted by and revolved around Kim, was shut down immediately.

Surrounding the latest revelation of Kim’s sexual misconduct Monday, Kim’s agency stated that the comedian has talked with the crew of the seven shows he is currently involved in and has decided to step down from all of them.

“We apologize for causing concern with the disgraceful news about Kim. He feels deep remorse for his actions,” said the agency.

Kim was the host of seven TV programs, including KBS2’s “Entertainment Weekly,” tvN’s “Salt Tour,” an MBN TV show, the title of which translates to “Do You Want to Rest Today?,” KBS’ “Kim Saeng-min’s Receipt” and MBC’s “Omniscient.” Kim has been a host for three of the mentioned shows for over 15 years - a remarkable feat for any celebrity.

Kim recently gained popularity after he began a podcast titled “Kim Saeng-min’s Receipt” in which he gave penny-saving tips to his listeners. The program was made into a show on KBS in November. The podcast has been deleted from the internet.

On Monday, entertainment news outlet Dispatch reported that Kim had sexually harassed two female crew members of a TV show 10 years ago when the team was out at a karaoke. Kim gave a public apology on Monday afternoon, saying, “If I had not done the things that I did that night, then I wouldn’t have hurt all the people that I did. I am sincerely sorry.”