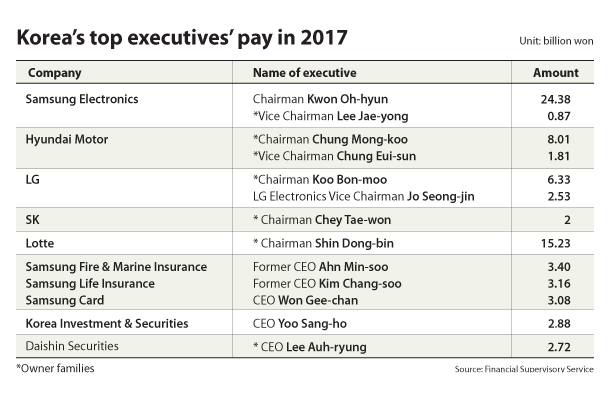 A Samsung spokesperson said Kwon received the huge amount of performance-based bonuses as a reward for leading its semiconductor division to record-high earnings.

Kwon’s 2017 earnings were the highest ever paid to any top executive at a Korean conglomerate since companies started reporting how much they paid their top brass to the Financial Supervisory Service in 2013. The record broken was Kwon’s earnings in 2015, which totaled 14.95 billion won.

Kwon wasn’t the only one making historic money at Samsung.

Vice Chairman Shin Jong-kyun of Samsung Electronics, who climbed up the corporate ladder after entering the company as an engineer, received 8.43 billion won including his bonuses. Vice Chairman Yoon Boo-keun made 7.67 billion won.

Kwon, Shin and Yoon are a well-known trio of chief Samsung managers. Though all three handed over their executive roles to a new generation of leaders in the latest shareholders’ meeting last month, their earnings were still revealed in the 2017 annual report.

The country’s second-largest consumer electronics producer posted revenue of 61.4 trillion won during the fiscal year of 2017, up 10.9 percent from the previous year.

“We gave out bonuses based on how close the company reached to the goals established over the last three years,” the cosmetics giant said.

As the automaker suffered last year due to its troubles abroad, the elder Chung’s earnings fell by 1.27 billion won compared to the previous year and his son’s earnings shrank by 352 million won.

Lee Jae-yong, the vice chairman of Samsung Electronics, who was freed recently from jail, received 871 million won last year. He made 318 million won as his salary and received bonuses of 529 million won.

“Lee didn’t receive any salary from the company after he was indicted and arrested on Feb. 17 last year,” Samsung explained. “The bonuses that were paid based on company performance were granted following internal guidelines.”

In general, top managers who increased the value of their companies earned a lot more than they did in previous years thanks to substantial bonuses.

Samsung’s financial companies paid the most to their chief executives last year, and Samsung also paid their employees well.

Employees at Samsung Electronics earned 117 million won on average last year, thanks to the semiconductor boom the electronics giant enjoyed last year. The average annual salary of those working for the behemoth has surpassed 100 million won for six straight years, starting in 2013.

However, there was a large wage gap between male and female workers at the Samsung Electronics.

Kia Motors, Hyundai Motor, Samsung SDS and LG Chem followed, with each paying over 90 million won in average annual pay to its workers.