Kia’s new K9 takes a swing at the Germans

Kia’s new K9 takes a swing at the Germans 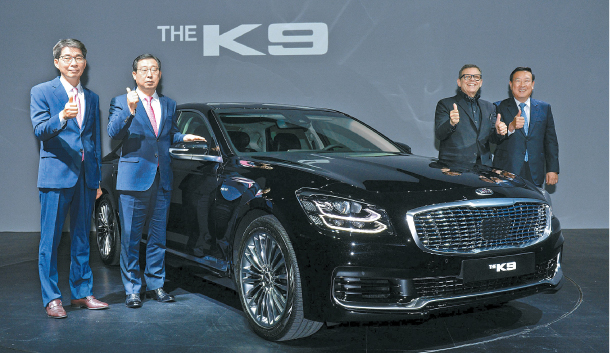 Kia is again taking on the German luxury leaders with its pricey new K9 sedan, which packs a powerful turbo punch.

For the K9’s first full revamp since it was launched six years ago, it gets a new design and the Stinger’s 370-horsepower turbo V6 engine.

Kia hopes to sell 15,000 K9s this year and eventually ramp up sales to 20,000 cars starting next year. The company hopes that the model, dubbed the K900 in the United States, will be more successful overseas than its predecessor. Kia exported 570 units of K9 last year but with the new model Kia hopes to ramp up the amount to 6,000 units per year.

“The K9 is going to lead innovation within the K series,” said Kia President Park Han-woo at the K9’s launch event on Tuesday in southern Seoul.

The rear-wheel-drive model offers the choice of three gasoline engines: a base 3.8-liter V6, the 3.3-liter turbo V6 and the top-of-the-range 5.0-liter V8.

In addition to basic driving assistance functions, such as lane-keeping assist and a forward-collision warning system, the K9 is also equipped with what Kia is calling a navigation-based smart cruise control, which controls the car’s speed before entering winding roads. It also features a lane departure warning system, which keeps the car from wandering from its lane on highways and city roads.

“K9 is the essence of the auto company’s latest technology and capacity,” a Kia official said. “It has been developed to suit consumers’ every last need.”