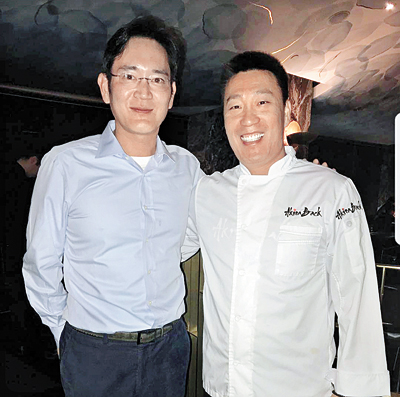 Samsung Electronics Vice Chairman Lee Jae-yong, thought to be traveling in Europe on business, has apparently flown to Canada, according to an Instagram by a celebrity chef Monday.

Akira Back, a Korean-American chef who runs restaurants in Seoul and many other cities around the world - Bangkok, Dubai, Las Vegas and Toronto - posted a photo with the Samsung leader, who visited Back’s Toronto restaurant. In the photo, the two had their arms around each other’s shoulders.

“It was great to see you visit my place,” Back said in Korean.

The photo indicates that the destination of Lee’s first overseas trip after he was freed from police custody on corruption charges early February was not only Europe but also North America. Lee departed to Europe on March 22 and reportedly stayed there until as late as March 30, meeting with business partners, investors and staff and looking for potential investment destinations in next-generation technologies such as artificial intelligence and biotechnology.

It is not known why the vice chairman was visiting Toronto, although Samsung has been running an AI Lab under the Samsung Advanced Institute of Technology at the Universite de Montreal in Canada since August last year. It came a year after the tech giant bought Viv Labs, a Silicon Valley start-up founded by the creators of Apple’s Siri.

The heir-apparent to the biggest business empire in Korea may also be planning to swing by Samsung’s Silicon Valley headquarters in California.

On Monday, Samsung Venture Investment, a start-up investment arm of Samsung Electronics, belatedly revealed that it has invested $4.6 million in Audioburst, an Israel-based start-up that runs a platform that offers customized audio content to users by analyzing their listening habits and preferences. Samsung will integrate Audioburst’s system into a number of its products, starting with Smart TVs. The system could eventually merge with Samsung’s voice-recognition platform Bixby, observers say.