Trump-Kim summit will be a start to a start, says Gallucci

Trump-Kim summit will be a start to a start, says Gallucci 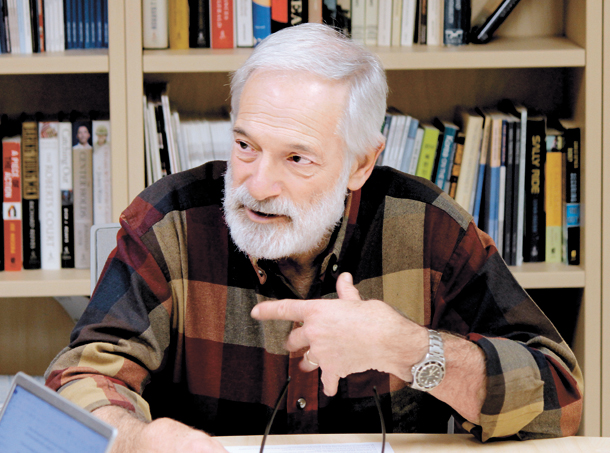 Former diplomat Robert Gallucci, chairman of the U.S.-Korea Institute at the Johns Hopkins School of Advanced International Studies, sits for an interview at the university in Washington on March 8. [LEE GWANG-JO]

The JoongAng Ilbo conducted a series of interviews with international affairs experts who weighed in on the proposed summit between the leaders of North Korea and the United States — which could determine the future of the Korean Peninsula.

The upcoming summit between the leaders of the United States and North Korea should establish a “constructive atmosphere” to start working on details of a more concrete agreement, said Robert Gallucci, the point man on the North Korean nuclear issue for the Bill Clinton administration.

Gallucci served as the chief U.S. negotiator during the North Korean nuclear crisis of 1994, and helped write history when, after months of negotiations, Washington and Pyongyang signed the Geneva Agreed Framework in 1994.

Under that agreement, the North agreed to freeze its nuclear program in return for nonmilitary reactors, economic aid, oil and improved relations with the United States.

Though a quarter century has passed, Galluci recollects vividly the long and arduous process of negotiating with the North to scrap its nuclear program.

Gallucci, chairman of the U.S.-Korea Institute at the Johns Hopkins School of Advanced International Studies and a distinguished professor of diplomacy at Georgetown University, sat down for an interview with JoongAng Ilbo in Washington on March 8, to share his expertise negotiating with the North.

“I cannot see a single session solving this problem,” said Gallucci. “If this is going to be a successful engagement, the summit between Kim Jong-un and Donald Trump will be the start of a series of talks.”

Gallucci served over two decades in government, including as an assistant secretary of state for political-military affairs.

The following are edited excepts of the interview.


Q. Do you think a “one-shot” negotiation is possible between Trump and Kim Jong-un at the first U.S.-North Korea summit?

A. First of all, it never occurred to me that this would be a one-shot negotiation. It is hard for me to believe that anybody familiar with the complexity of the issues would think that anybody — and I do mean anybody — could sit down at a negotiation and work out all the differences between the Democratic People’s Republic of Korea and the United States in one session. It is, for me, inconceivable. If you accept that, that means that if this is going to be a successful engagement, the summit between Kim Jong-un and Donald Trump will be the start of a series of talks which will be top-down, because you can’t go higher up. So that means that there would be presumably professional diplomats or at least representatives of both governments who would then meet someplace or at an extended period of time, back and forth, to work out the details of an agreement. I cannot see a single session solving this problem.


What issue will be most hotly contested at the U.S.-North Korea summit?

If I look back to 1994 and to the 2000s, transparency, verification, monitoring, that’s always a difficult matter in the negotiation where we are looking to limit capability on both nuclear weapons and delivery vehicles. I imagine what’s in the mind of the American side is that they would want to reach an agreement in which the North Koreans commit to giving up their nuclear weapons program, that they want a nuclear weapons-free peninsula. So you can imagine North Koreans saying, “Sure. It’s done. We dismantled all our nuclear weapons yesterday. Everything’s done. Now, here’s what we would like.”

We might say, “We think the IAEA (International Atomic Energy Agency) needs to get back in and do what it considers a full scope of safeguards.” North Koreans might hop on, maybe not. So what I’m saying here, you want to know where I see the greatest sensitivity will be, it will be on gaining agreement by the North Koreans to adequate measures to permit transparency, to permit monitoring of the agreement and ultimate verification of compliance with the agreement.


Some experts point out that it is impossible to detect all the nuclear facilities or storage of nuclear weapons. So is complete verification possible?

I think that’s a very smart observation. I think that everybody ought to be aware that if you frame the agreement properly, you can make it verifiable. If you frame it improperly, you make it impossible to verify. So a properly framed agreement would say that North Korea will give up its nuclear weapons programs. So all the facilities necessary to produce fissile material, uranium enrichment, gas centrifuge plants, nuclear reactors and reprocessing plants, all the things that would produce either highly enriched uranium or plutonium, would be shut down. Could we monitor that? Verify compliance? Yes. An improperly framed agreement would say that North Korea agrees it will give up all its nuclear weapons and fissile material.


Do you think the United States and the North will easily reach agreement on the location of the summit, and which are plausible?

It would not be my preference that the president of the United States goes to Pyongyang. I don’t think the optics of that is optimal. I can imagine a lot of other possibilities beginning with Panmunjom [in the DMZ]. I can imagine Seoul. I can imagine Beijing. Perhaps Hawaii.

I think it unlikely that the talks would take place in Washington or in the continental United States, like Seattle or San Francisco because Kim Jong-un is famous for not traveling … I’m prepared to be surprised again. I think more likely, the talks would be at Panmunjom or Beijing, or something of that nature.


What are your hopes for the summit?

I hope it will not produce disaster. I hope there will not be a food fight, I hope they will not insult one another. I think the most you can hope for in this summit is that they establish an atmosphere that is constructive so that when the negotiators, the ones that will make the true deal, define the deal, that they will get together in a good frame of mind. They will come together looking to solve this problem. So I want the summit to go well without a hitch. I want everybody to have a good time, eat good food, drink good drink and then go home. And then let real negotiators sit down and work out the details.


Do you think some sort of road map toward denuclearization can be agreed upon during the summit?

I think that’s asking a lot. I think that’s asking for too much substance. I mean, if they were meeting with experts in the next [room], in other words if they were in this room meeting, and next door their experts were meeting, and they were going to stay together for a week and talk to each other in a one-to-one and on the side the experts were going to be working out details, okay. Principles? Wonderful. But if they are essentially going to have a day with a big dinner, and then they’re going to go home, I don’t think you get principles out of that. I think it’s too short.


Is there a chance for a dangerous situation if the talk falls apart?

I think [Georgetown University professor and former White House official] Victor Cha spoke to this. I think he said this is a “risky business.” It is because if it doesn’t work at this level, then you can’t go to a higher level, right? You can only go to a lower level, so you don’t want it to fall apart. You really should work to avoid the worst outcomes here. And if you don’t have a bad outcome, you sort of have a good outcome, by definition. So I think you try to keep the atmosphere positive. If they can do that, they would have done a lot.


How do you think the abrupt replacement of Secretary of State Rex Tillerson with Mike Pompeo will affect the summit?

The news media characterizes Mr. Pompeo, soon to be Secretary Pompeo, as a hardliner on North Korea. I think the president is considered to be a hardliner on North Korea. And we have come to expect Secretary Tillerson to be an advocate of engagement and talks, a softer liner. That’s how I think generally how this was characterized. So I think it will be easier for the president to find support with Pompeo than he might have with Tillerson.


Is the North Korea that you encountered the same or different from today?

I think there is a big difference; 25 years ago, when I first met the North Koreans at the U.S. Mission to the United Nations, North Korea was a country as far as we knew, without nuclear weapons, without very much fissile material, a country with no extended range ballistic missiles, certainly not intercontinental ballistic missiles, no intermediate-range ballistic missiles, maybe the Rodong medium-range ballistic missiles; in other words, less capable in terms of weaponry. It was a country that was relatively inexperienced in these matters. I don’t think their diplomats had a lot of experience negotiating nuclear matters with the United States. And I think we had a lot of experience negotiating nuclear weapons issues. We had negotiated with the Soviets over decades. So we had an advantage. I think that’s no longer true.

I think that North Korea has a lot of capability they didn’t have. They clearly have nuclear weapons. They clearly have ballistic missiles at an extended range. They have accumulated fissile material, certainly plutonium and probably highly enriched uranium. They have diplomats who have gone to meetings, particularly during the George W. Bush years between 2005 and 2008. And their diplomats are veterans from way back in our negotiations in 1993, 1994. So they are now more capable, and they are much more experienced. So I think that it creates a situation in which we can have much more of a diplomatic engagement than we had 25 years ago.


If you were Trump, what gift would you bring Kim Jong-un?

There are things you might want to do to set the right tone. So yes, there would be a gift. I think both sides would come with gifts … I mean a symbolic gift. When I finished my first round of talks with [the late Vice Premier] Kang Sok-ju, he gave me a wooden box with ginseng tea because he knew I liked ginseng tea.

I gave him two things by my memory, if I got this right. He quoted “Gone with the Wind” to me, so I think I got him a copy of the book. And when we went out to lunch, he seemed to have a real enthusiasm for Tabasco sauce, so I got him a large bottle of Tabasco sauce. So these are not very expensive gifts, they’re just little personal tokens that kind of set the atmosphere.