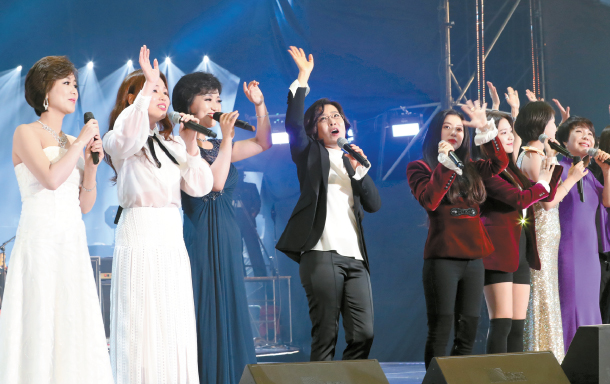 South Korean artists held a second concert in Pyongyang Tuesday, this time alongside North Korea’s Samjiyon Orchestra, belting out hit songs from both countries to a crowd of 12,000.

The concert, entitled “We Are One,” was held at the Ryugyong Jong Ju Yong Gymnasium, and included performances by 11 South Korean groups, including girl group Red Velvet. North Korea’s Samjiyon Orchestra, which visited South Korea last February to hold two concerts in Seoul and Gangneung, Gangwon, sang five songs with the South Korean artists, according to pool reports.

The entire delegation, 186 people including South Korean government officials, reporters, technicians and staff, was scheduled to depart from Pyongyang at midnight and arrive at Incheon International Airport at around 1:30 a.m. today.

The second concert was held two days after the South Korean performers threw a two-hour concert Sunday night at the East Pyongyang Grand Theatre, entitled "Spring Comes," in which Kim Jong-un made a surprise appearance with his wife Ri Sol-ju.

It is not known whether the North, which strictly bans its citizens from listening to K-pop, will air any of the concerts on TV, though a five-minute summary of the Sunday concert was shown Monday afternoon on the North’s Korean Central Television.

But only one song was featured in the report, the finale, “Our Wish is Reunification.” In the South, the Sunday show will air in its entirety on local channel MBC this Thursday at 7:55 p.m.

According to pool reports, both concert venues were completely packed. North Korean authorities said the audience were chosen through a lottery with special emphasis on the social disadvantaged - 1,500 seats on Sunday and 12,000 seats on Tuesday.

Meanwhile, a working-level meeting between the two Koreas discussing protocol, security and press coverage for the April 27 South-North summit will be held today in Peace House, a South Korean-controlled building in the truce village of Panmunjom.

The Unification Ministry notified the North via the Panmunjom hotline Tuesday that seven interlocutors, all from the Blue House, will attend today’s talks on behalf of the South Korean government. The two countries are expected to hold at least one more working-level meeting and a high-level meeting on April 18.