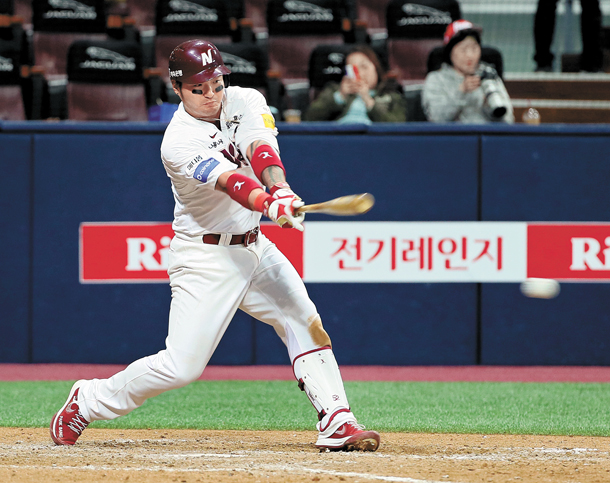 Park Byung-ho of the Nexen Heroes makes a hit during a game against the KT Wiz at Gocheok Sky Dome in Seoul on Tuesday. [YONHAP]

The 2018 KBO season is all about the home runs.

And this isn’t just a Korean phenomenon. The MLB has also been seeing a gradual increase in the number of home runs hit each year - last season a total of 6,105 home runs were hit, 42 more than in 2000.

A few years ago Statcast, an automated tool developed to analyze player movements and athletic abilities introduced to all MLB stadiums in 2015, analysts reported that the most ideal launch angle to rain down home runs is between 15 and 40 degrees. This data didn’t fall on deaf ears - batters are now aware, at least vaguely, what the ideal hit looks like, leading to more home runs.

Now it looks like the KBO batters have had their protractors out.

The return of three former major leaguers - Kim Hyun-soo of the LG Twins, Park Byung-ho of the Nexen Heroes and Hwang Jae-gyun of the KT Wiz - could be one reason for the sudden increase in balls leaving the field. The three MLB alumni have already hit seven home runs in total as of Tuesday’s games.

In addition, a number of the foreign players that the KBO clubs brought in this year are sluggers.

The KT Wiz and the SK Wyverns are well ahead of the other eight clubs at the beginning of the season when it comes to home runs. As of Tuesday’s game, three batters led the league in home runs, and all of them played for the Wyverns. Based on team home runs, the Wyverns led the category with 25, followed by the Wiz with 21. The Wiz cemented their position in the top two with eight home runs in their weekend series against the Doosan Bears.

On Saturday, while the Wiz was losing 0-8, Kang Baek-ho started the Wiz’s home run streak with a three run home run. Then in the eighth, Mel Rojas and Lee Hae-chang each hit a grand slam to win the game. This was the first time in the league’s history that two batters on the same team have hit grand slams in one inning. The Wiz took an additional four home runs the following day to conclude their weekend series against the Bears with a win.

The Wyverns took their spot at the top of the home run table on Tuesday, hitting six home runs during their game against the Tigers to win 13-3.

Kim Dong-yub of the Wyverns became the sole leader in the league’s home runs at six.

Last season, the Wyverns finished last in team batting average but were dominant when it came to number of home runs, hitting a total of 234, a league record. Along with Choi Jeong, who hit 46 home runs to win the league’s home run title, four other batters managed to hit more than 20 home runs throughout the season. Nine hit more than 10.

Once the Wyverns worked out that their stadium, the Incheon Munhak Stadium, favors right-handed sluggers, the coaching staffs adopted a strategy that favors the right hand. Since 2015, the team has brought in more right-handed batters through trades or rookie drafts.

The Wiz also set their sights on home runs at the end of the 2016 season. Kim Jin-wook, appointed at the time as manager of the ninth ranked team in terms of home runs, emphasized the importance of angles.

“At spring camp, we picked a target and trained in hitting toward that target, allowing the batters to make stronger hits,” said Chae Jong-bum, the Wiz’s batting coach. “This helped them raise their launch angle.”

“The addition of coach Lee Ji-poong this season [from the Nexen Heroes] is definitely helping,” said Kim. “More than anything, the addition of Yoon Suk-min, Hwang Jae-gyun, Kang Baek-ho and other big hitters are the biggest impact [on the team].”