Korea on Wednesday finalized its men’s hockey roster for next month’s world championship. 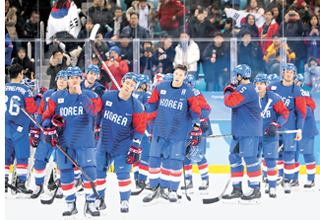 The Korean men’s ice hockey team leaves the rink after losing to Switzerland 0-8 at Gangneung Hockey Centre in Gangwon on Feb. 17. [YONHAP]

It is the highest tier among the IIHF’s world championships, and Korea will play at this level for the first time after earning a promotion with a runner-up finish at last year’s Division I Group A tournament.

From the team that competed at the PyeongChang Winter Olympics in February, defenseman Cho Hyung-gon has been replaced by Asia league rookie Song Hyung-chul. Korea also has a new third-string goalie in Lee Yeon-seung.

Those are only minor changes, as the core of the team has been kept intact.

There are two groups of eight nations at the competition. Korea, at No. 19, is the lowest-ranked participant.

Since the IIHF adopted the current promotion-relegation system for its world championships in 2012, no nation has survived the top-tier event after getting promoted from Division I Group A.

At PyeongChang 2018, Korea lost all four matches - three in the group stage against the Czech Republic, Switzerland and Canada, and one in the qualification playoffs against Finland. The Olympic tournament didn’t feature any NHL players, but NHL stars whose teams miss the playoffs that start later this month will suit up for their countries at the world championship.

That means Korea could go up against reigning Hart Trophy winner Connor McDavid, whose Edmonton Oilers have long been eliminated from playoff contention, among other Canadian stars.

At the PyeongChang Olympics, Korea battled Finland hard in a 5-2 loss, but it will face a vastly different Finnish team this time, with NHL regulars like Teuvo Teravainen (Carolina Hurricanes) or Rasmus Ristolainen (Buffalo Sabres) in their lineup.