Having won the league in Korea, Japan and Turkey, Kim Yeon-koung’s hopes of picking up a fourth title in China were dashed when Shanghai lost 2-3 to Tianjin in the final round of the seven-game championship at Luwan Stadium in Shanghai on Tuesday. 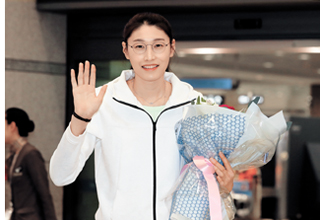 Though they failed to take home the title, Kim had a dramatic impact on Shanghai’s prospects - before she joined the team they were ranked in the bottom half of the table, yet by the end of her first season they had won the regular season and reached the championship.

Long before the season ended, Shanghai started asking Kim to renew her contract but no decision has been made. Now that the one-year contract has ended, she is once again receiving various offers from clubs in Japan and Turkish leagues.

Turkish clubs are particularly keen to bring Kim back to their league. Having played in Turkey for six seasons from 2011, Kim led her club to a number of championship victories. Not only that, the Turkish league is considered the best league for women’s volleyball and offers the most lucrative contracts in the world.

However, the biggest disadvantage of playing in the Turkish league is the number of games. Players are required to play in more than 40 games in a season, including the league and Cup matches. Since Kim is the Korean national team’s leading player, balancing the league and national schedules has always been a challenge physically.

As a result, Kim signed a much lower value contract with a Chinese club because of the flexible schedule and shorter traveling distance. Kim is given more time to rest and train for the national team, as the season concludes earlier than the Turkish league. Considering the Tokyo Olympics could be Kim’s last appearance on the international stage before her retirement, making it to national training sessions and games is hugely important.

Though Kim is done with the season at Shanghai, she has no time to rest. On Sunday she will compete in an All-Star game against Japan at Hwaseong Gymnasium in Gyeonggi.

To compete at the 2020 Tokyo Olympics, Korea will be busy over the summer competing in a lot of international competitions to improve their world ranking.