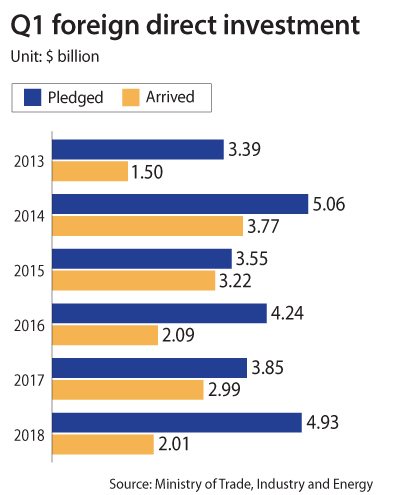 Foreign direct investment pledged to Korea in the first quarter of 2018 rose well above the average of the past few years thanks to thawing relations between Korea and China, but concerns remain over how much of the pledged amount will actually make it here.

According to data provided by the Ministry of Trade, Industry and Energy on Wednesday, the amount of investment pledged to Korea from January to March this year stood at $4.93 billion, up 28.1 percent compared to the same period last year.

The amount pledged by Chinese investors has jumped by 541.5 percent compared to the first quarter of 2017 to $1.05 billion, accounting for about 20 percent of the entire amount pledged in the period.

“Such a drastic increase compared to the same period last year was due to the thawing economic relations after the meeting between the leaders of Korea and China [in December 2017],” Jang further explained.

Out of the $1 billion from China, $800 million was pledged in real estate, the director general explained, adding that although the details cannot be completely disclosed, it was part of a regional development project.

“I recently travelled to Beijing and the atmosphere at the negotiation table for working-level officials was very positive,” Jang said. “We expect investment flooding in from China will increase.”

But it's unlikely that all of the pledged amount will actually make it to Korea.

Investment arriving from China has been in decline in the past couple of years. In 2016, a total of $480 million actually came into Korea from China.

This figure more than halved in 2017 with only $201 million arriving in Korea.

“There has been a bit of discrepancy between the amount committed and the amount actually arriving [from China],” said another official from the Trade Ministry.

“We believe this is because of the Thaad issue and presume that the situation is likely to improve this year.”