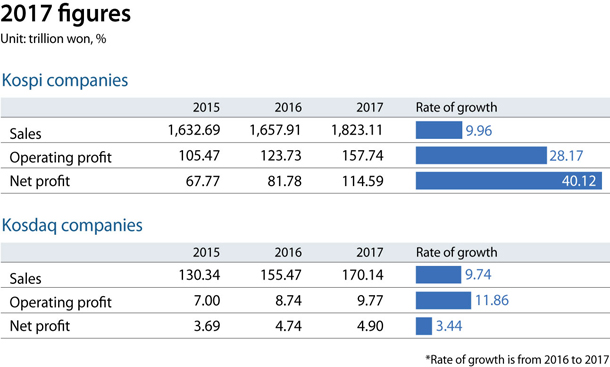 The total operating profit of the companies stood at 158 trillion won and net profit at 115 trillion, increasing 28.17 percent and 40.12 percent each. The figures exclude financial companies listed on the index.

Pharmaceutical giant Celltrion recorded the highest operating profit ratio at 55 percent, up 17.77 percentage point from a year before. Top game developer NCsoft and Kangwon Land, a public company that runs the only casino in Korea open to locals, each posted 33.26 percent and 33.09 percent in operating margin.

It was the tech companies that yet again led a solid year for the listed companies.

Information and technology companies’ combined sales improved by 21.55 percent from a year before. Operating profit more than doubled, increasing 211.65 percent.

The center of it all was semiconductor giants.

Even taking the “Samsung effect” out of the equation, the numbers remain impressive.

The financial structure of these companies also improved in 2017.

The total financial asset of these companies by the end of the year was 2,427.65 trillion won. Liabilities stood at 1,267.85 trillion won, and the debt to equity ratio fell by 4.74 percentage points from a year before to 109.32 percent.

Out of the 532 companies, excluding Samsung, 424 were in the black and the remaining 108 in the red.

Despite the rally last year, the index right now is stuck in yet another “boxpi.”

“Boxpi,” a combination of Kospi and the word box, is an expression used to imply the bourse is boxed in, or unable to move above a certain threshold. Right now, the index hovers above the 2,400 level, unable to punch through to 2,600 even though companies are soon to announce their earnings from the first quarter of this year. Many of them are likely to present record-breaking figures once again.

“First-quarter performance is already reflected [in the Kospi’s rally from last year],” explained Kim Sung-hwan, an analyst at Bookook Securities. “[The Kospi] has a good chance of breaking out of its boxpi if external uncertainties such as the trade war between the United States and China and relations between North and South Korea improve.”

“Supply and demand for IT companies [stocks] was especially notable last year, but looming uncertainties for these companies, such as Samsung Electronics’ first-quarter earnings, to be announced in April will force investors to flock to other sectors,” said projected Jeong Da-i, an analyst at Meritz Securities.