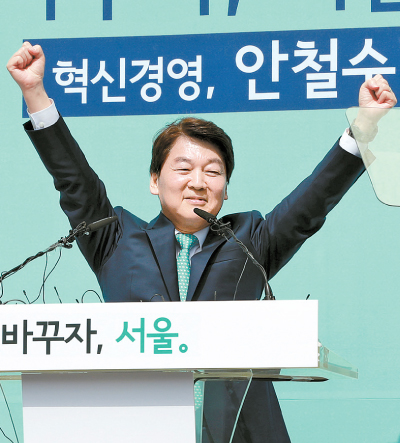 Ahn Cheol-soo declares his bid for the Seoul mayoral election on Wednesday. [YONHAP]

Former presidential candidate Ahn Cheol-soo on Wednesday declared his candidacy in the Seoul mayoral election, hoping to replace the mayor he helped clinch the position seven years ago.

Declaring his bid at the Seoul Metropolitan Council, Ahn promised an era of renovation as mayor of Seoul and policies suited for the Fourth Industrial Revolution.

“I am a politician who has had successful careers as a doctor, professor, IT expert and businessman. I will make the best of my professional experience to transform Seoul,” said Ahn.

Emphasizing his expertise in IT, Ahn said he would apply big data and relevant software to make Seoul a smart city that is “safe and convenient” with a vast amount of fourth industrial revolution-based information.

He also pledged to abolish excessive government regulation of IT-related industries, such as no-drone fly zones, if elected.

In a grim warning that half of today’s students in elementary schools will eventually get jobs that do not even exist now, the former anti-virus software firm CEO said he would help prepare those students as mayor by encouraging coding classes as after-school activities.

In a by-election for the Seoul mayoralty in October 2011, Ahn was planning to run but withdrew to prevent taking votes from current mayor Park Won-soon, guaranteeing Park victory.

Park has maintained his job, which manages an annual budget of some 30 trillion won ($28.2 billion), by defeating rivals in the 2014 local elections. The former civic activist is running for his third term in June.

Ahn’s decision to give up his candidacy in 2011 caught many by surprise because his win was considered a sure thing. Ahn enjoyed high popularity thanks to his image as a corruption-free entrepreneur capable of shaking up a political establishment distrusted by the public.

His approval rating in that mayoral by-election hovered around 50 percent while that of Park, who was relatively unknown, was around 5 percent.

Ahn’s concession of the bid was called at the time a “beautiful concession” as he did not demand anything in return. Attention is turning to what campaign strategy Park will come up with if he wins the nomination for the Democratic Party. Ahn’s Bareunmirae Party will not hold a primary so he is its candidate. Ahn is in charge of recruiting candidates for the party.

“Park was given the mayoral position for free thanks to Ahn. Many still remember that fact,” said Rep. Ha Tae-kyeung of the Bareunmirae Party in a TBS radio interview on Wednesday.

Ahn’s career as a politician has been rocky over the past seven years. He failed in two presidential runs and is struggling to expand his support base.

In the 2012 election, Ahn gave up his candidacy to help then-candidate Moon Jae-in just three weeks before the election, disappointing his supporters. In last year’s presidential election, Ahn came in third trailing Moon and Hong Joon-pyo of the conservative Liberty Korea Party, winning 21.41 percent of votes.

With Ahn joining the race, the Seoul mayoral election now has five contenders. In the ruling Democratic Party, two former floor leaders - Park Young-sun and Woo Sang-ho - have declared their bids and Park Won-soon is expected to. From the major opposition LKP, former Gyeonggi Gov. Kim Moon-soo is expected to declare a bid. The election will be held on June 13.