Kang claims Seoul has a ‘roadmap’ for denuclearization

Kang claims Seoul has a ‘roadmap’ for denuclearization 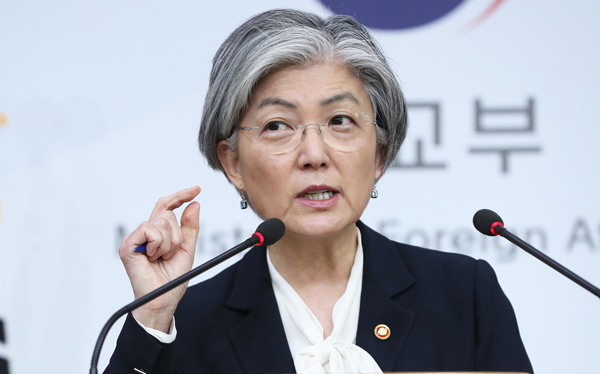 Foreign Minister Kang Kyung-wha talks about a roadmap for the denuclearization of North Korea at a press briefing Tuesday. [YONHAP]

The South Korean government has an overall roadmap for the denuclearization of North Korea based on its past history of negotiations on the issue, said Foreign Minister Kang Kyung-wha Tuesday, who added that the nuclear issue is expected to be at the top of the agenda in upcoming summits with Pyongyang.

At a press conference at the Ministry of Foreign Affairs in central Seoul, Kang said the Foreign Ministry will put its utmost effort into cooperating with the United States and the international community to successfully hold a summit between President Moon Jae-in and North Korean leader Kim Jong-un set for April 27 and a subsequent one between Kim and U.S. President Donald Trump.

South Korea’s Foreign Ministry, Kang said, has a “long history and know-how on the North Korea nuclear issue,” based on its experiences directly dealing with Pyongyang in negotiations over denuclearization in the past.

“That is why, based on this, we have our own general roadmap,” she added. “However, this is an issue that has a negotiation counterpart, which is why it is not a good negotiation strategy to say in detail what we are pushing for or what timetable we are setting at this time.”

She also acknowledged that what North Korea “really means” by conveying a willingness to denuclearize “will be better determined through talks with North Korea” and in the process of preparation for the upcoming summits.

“We are making preparations as to enable North Korea’s denuclearization to be an important item on the agenda for the inter-Korean and U.S.-North Korea summits,” said Kang. “That is why I expect we will be able to grasp more details in the process of discussions going forward.”

When asked how Seoul and Washington plan to go forward with the complete, verifiable and irreversible dismantlement (CVID) of the North’s nuclear program, Kang emphasized, “The complete denuclearization of North Korea is a shared goal of not just South Korea and the United States but the international community.”

She continued, “But in terms of how long it will take to achieve this, and the timetable to do so, would require close cooperation and consultation between South Korea and the United States, keeping in mind the lessons learned from past negotiations with the North, and we are conducting a thorough review of this and sharing the results.”

She said that trade and security issues are closely consulted between Seoul and Washington on various levels including between diplomats and trade officials, as well as the National Security Council and between the two countries’ presidents.

Kang said that while Seoul has been in continuous efforts internationally and domestically to improve the dismal North Korean human rights situation, she pointed out that “each talk has a counterpart,” and that “talks are carried out based on an agenda agreed upon [beforehand] to enhance the dialogue.”

Thus, she added, there will have to be more discussion on whether the human rights issue will be brought up in the upcoming South-North summit.

Recounting the success of the recent Winter Olympics, Kang added, “We are putting various efforts into enabling the momentum of peace and dialogue obtained from the PyeongChang Olympics to lead to actual progress toward resolving the North Korean issue and the establishment of permanent peace on the Korean Peninsula.”

She encouraged North Korea’s recent diplomacy with China and Russia, and also pointed to South Korea’s upcoming trilateral summit with Japan and China in May as being conducive to sustaining the momentum. Kang continued, “As the president has emphasized, if the two summits achieve the desired results, they will become a milestone toward resolving the North Korean nuclear issue and the establishment of peace on the Korean Peninsula.”