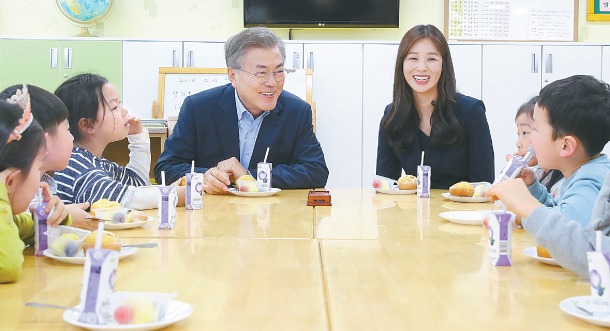 “Setting up a day care system is one of the most important goals of this government,” said Moon during a visit to Kyungdong Elementary School in Seoul, accompanied by Education Minister Kim Sang-kon and other officials.

“The government’s agenda is to provide public day care service for every child who needs it,” he said.

Moon’s unveiling of a new day care policy came as an increasing number of working mothers find it difficult to strike a balance between work and household responsibility, especially taking care of children as Korean society still puts much of the burden of raising children on mothers.

A failure to find that balance leads many women to quit jobs, and that, in turn, is the main reason why some women choose not to have babies, an issue Moon said could lead to a “collapse of community.”

“The lack of after-school day care makes it difficult for parents to maintain a work-and-life balance,” Moon said. “Especially for women, it is the biggest reason to quit work. The agony for a family that has no place or no one to look after their child is profound.”

While the government estimates up to 640,000 young students are in need of after-school day care services, only 330,000 are receiving such benefits, or 12.5 percent of 2.67 million elementary school students, according to the government.

Speaking in grim terms, Moon added, “The difficulty of child-rearing leads to a low birthrate. And a low birth leads to a collapse of community. The problem is acute not only for the country but also for the business community.”

To expand the availability of after-school day care, the government announced it will gradually expand school day care into the evening hours from the current 5 p.m. Elementary school students above second grade will also be covered by the expanded service.

Currently, first and second graders have mainly benefited from day care due to the shortage of classrooms to accommodate older students.

The government plans to invest more than 1 trillion won ($940 million) to boost the number of day care classrooms to 3,500 from the current 1,500 and hire day care teachers.

The average birth rate per woman was an all-time low of 1.05 last year, down from 1.17 the previous year.