Next start uncertain for Ryu as rain disrupts play

Next start uncertain for Ryu as rain disrupts play

Los Angeles Dodgers’ Korean starter Ryu Hyun-jin made his first start of the season on Monday in Arizona. Just when and where he will make his next appearance remains up in the air. 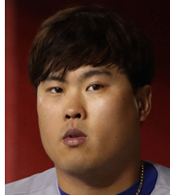 The left-hander had been initially scheduled to start Sunday against the San Francisco Giants on the road, following a five-day rest.

But manager Dave Roberts said Wednesday in Arizona that Clayton Kershaw, the No. 1 starter, will take the mound Sunday instead, so that he could stay on his regular, five-day cycle.

Kershaw last pitched Tuesday in Arizona. If Roberts hadn’t made this switch, Kershaw would have been scheduled to go next Tuesday, a break of six days in between starts.

The Dodgers have off days on Thursday and next Monday, bookending the three-game set against the Giants.

Kenta Maeda is scheduled to start Friday, followed by Rich Hill on Saturday. But rain is forecast in San Francisco for Friday. And if that game is canceled, it isn’t yet certain whether Maeda or Hill will get the nod Saturday.

In another scenario, Roberts could move Maeda to the bullpen temporarily and keep Hill in the rotation. Maeda made four relief appearances during the regular season in 2017 and nine more during the postseason. In that case, Ryu could either make an appearance against the Giants during the weekend or he could be pushed back into next week.

“If there is a rainout Friday, we have to pivot and figure out who we will want to throw,” Roberts told MLB.com. “We don’t have a lot of clarity.”

In his first start of 2018, Ryu was charged with three earned runs on five hits and five walks in three and two-thirds innings against the Arizona Diamondbacks. Struggling with his command all game, Ryu made 75 pitches and only 40 of them were strikes.

Ryu made one bullpen appearance in the 2017 regular season. But he was coming off shoulder and elbow surgeries, and the Dodgers didn’t think Ryu would be a good fit in the bullpen because he needed a lengthy pregame routine to get ready to pitch.

Ryu was left off the Dodgers’ postseason roster during their run to the World Series.