Ahead of the Korea Basketball League’s championship series, which starts on Sunday, the coaches of the Wonju Dongbu Promy and Seoul SK Knights talked about their strategies at a media day in Seoul on Thursday. 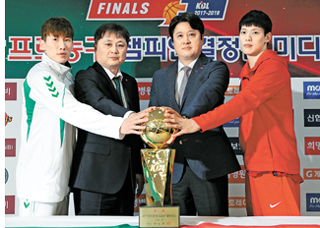 From left: Doo Kyung-min and head coach Lee Sang-bum of the Wonju Dongbu Promy stand with head coach Moon Kyung-eun and Kim Sun-hyung of the Seoul SK Knights and the KBL Championship Trophy on Thursday. [YONHAP]

“With the championship victory, we’ll make new history for the Promoy,” said Lee Sang-bum, head coach of the Promy.

After Lee said that he hopes to win the championship by the fifth game, Moon Kyung-eun, head coach of the Knights, said, “I’m expecting four wins and two losses. Since we’ve been through a lot of challenges to get here, we won’t miss this opportunity.”

The Promy and the Knights, who were the top two teams in the regular season, will start the best-of-seven championship at Wonju Gymnasium in Gangwon on Sunday. After the first two games, the next two championship games will be played at the Knights’ Jamsil Students’ Gymnasium.

“The Knights’ strength is that their tall players like Choi Bu-kyung, Kim Min-soo and Ahn Young-joon get rebounds and play offensively,” Lee said. “We’ll have to look out for that. I tell the players that we can win if ever [the Knights] don’t get ahead of us by more than 10 points by the third quarter.”

While Lee said he was worried about the Knights’ tall players, Moon was concerned about the Promy’s forward Deonte Burton. Playing in 54 games in the regular season, Burton won the KBL’s foreign MVP award, and scored 23.5 points per game with 8.6 rebounds. In three playoff games, Burton led the team, along with Doo Kyung-min, scoring 22.67 points per game.

“During the playoff game against the [Jeonju KCC] Egis, we got to play against Andre Emmett, who is just as good as Burton,” Moon said. “I think our players can play well against Burton too.”

Looking at the two team’s head-to-head record during the 2017-18 regular season, the Promy leads with four wins and two losses.

“We played without Kim Sun-hyung and lost a game even when we were leading by 20 points at one point in a game,” said Moon. “We’ll try our hardest to win [the championship].”

Along with the two head coaches, Doo and Kim of the Knights also attended the media day to represent the players. Doo won the regular season MVP award for Korean players, scoring 16.45 points and 3.83 assists per game. However, Kim had to miss the first four months of the season due to an ankle injury, but starting in the playoffs, Kim played a crucial role in helping the team advance to the championship.

“I want to win by the fourth championship game,” Doo said. “I want to win as fast as possible. If all our players continue to play without getting tired, we can win.”

Kim showed his determination when he led the team to the championship in 2012-2013. The Knights ended up losing to the Ulsan Hyundai Mobis Phoebus.

“Since this is our first time in five seasons to make it to the championship, we won’t miss this opportunity,” said Kim.