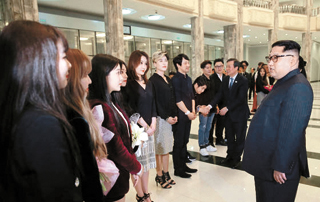 Last month, a Blue House official used the expression “cutting the Gordian knot” to describe comprehensively resolving the denuclearization issue. It was a confident analogy to use before the inter-Korean and U.S.-North summits.

But that was before the North-China summit changed the mood. As North Korean leader Kim Jong-un mentioned “phased measures” for peace in the meeting, the Blue House’s dream that the knot will be cut might be just a fantasy.

The myth of the Gordian knot warns of such a trap. In the fourth century B.C., King Gordias of Phrygia dedicated the ox cart that made him a king to the gods. His son tied the cart with an intricate knot to a post and declared that any man who can unravel the knot would become ruler of all of Asia.

In 333 B.C., Alexander of Macedonia was passing by and challenged the knot. When it was impossible to solve, he cut through the knot. Like Columbus’ egg, he solved a complicated problem in a simple way. Alexander the Great conquered Asia, and the prophecy came true. But some say that because he cut through the knot instead of unraveling it, his empire fell apart in the end.

The interpretation that cutting — not untying — leading to division should not be neglected in the inter-Korean affairs. A quick solution can have side effects. I felt this after hearing the reactions of some South Koreans after learning the news about North Korean leader Kim Jong-un and Workers’ Party Central Committee Vice Chairman Kim Yong-chol. The South Koreans felt uncomfortable despite having hopes for peace and unification in the Korean Peninsula.

A man in his 30s said that he found it offensive that a K-pop singer said, “I was overwhelmed by Chairman Kim Jong-un when he shook hands with me.” Some were even angry at Kim Yong-chol, who jokingly said, “I am Kim Yong-chol, who is considered the mastermind of the sinking of the Cheonan warship in the South.”

Many South Koreans were confused. They saw the agony of the families of 46 sailors who died after a North Korean torpedo hit the warship eight years ago. Our own minds may be just as tangled as the Gordian knot. The road ahead is not as straightforward as the ancient tale.