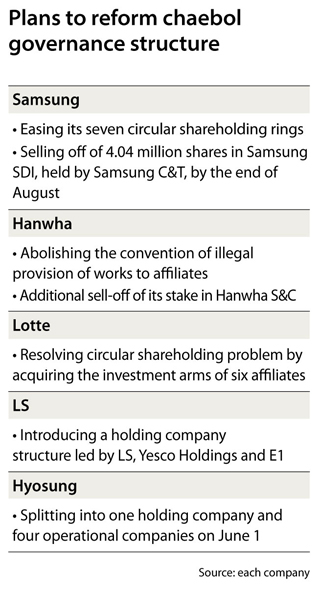 After Hyundai Motor Group’s announcement last week that it will resolve its complicated cross-shareholding structure, more conglomerates are bowing to pressure from Korea’s corporate watchdog to simplify their labyrinthine ownership schemes.

Other chaebol, led by their owner families, are considering following Hyundai’s example to find a way around converting to a holding company structure.

Korea’s largest automaker has been under fire from the Moon Jae-in government since last year to resolve the complicated web of cross-shareholding relationships among its affiliates.

The current cross-shareholding structure gives more power to the Chung family and allegedly promotes internal trading at the expense of shareholders’ money.

Hyundai Motor Group is now free from a rule that bans providing business projects to affiliates that owner families have 20 percent or more stakes in, and its affiliates can now join forces to participate in mergers and acquisitions.

The group can also legitimately have a financial affiliate, and the Chung family could earn public support for deciding to pay more than 1 trillion won ($940 million) in transfer income tax. The tax payments would have been unnecessary if they adopted a holding company structure.

After Hyundai Motor Group, Samsung is now in the spotlight. It has seven circular shareholding rings centered around Samsung C&T, which specializes in construction and trade. The insurance policy arms of the top conglomerate - Samsung Life Insurance and Samsung Fire & Marine Insurance - may have to sell a sizable portion of the stake they own in Samsung Electronics if the Insurance Business Act is amended.

Under the current act, insurers are barred from investing more than 3 percent of their own assets in shares of their subsidiaries. The percentage is currently based on the price at the point of acquisition, but the revision will base it on the current market price.

Samsung declared last April that it wouldn’t overhaul its governance structure, saying that changes “would not strengthen the competitiveness of the company’s businesses and could potentially weigh on the company’s operations longer term.”

Observers now speculate that Samsung may follow in the footsteps of Hyundai Motor Group.

“Samsung is likely to resolve the circular shareholding structure by having Samsung Electro-Mechanics, Samsung SDI and Samsung Fire & Marine sell off their stake in Samsung C&T to [Samsung C&T’s] top shareholder,” said Paik Gwang-jae, an analyst with Kyobo Securities.

Samsung C&T’s top shareholder is Vice Chairman Lee Jae-yong, who owns a 17.08 percent stake in the firm.The three sons of Hanwha Chairman Kim Seung-youn together own a 100 percent stake in Hanwha S&C, an IT solutions firm. Suspicions are focused on whether Hanwha affiliates have been colluding to provide business to Hanwha S&C, bloating its earnings. Hanwha is scheduled to come up with a new governance plan next month. LS and Hyosung, along with other top chaebol, are also accelerating their plans to change their corporate governance.