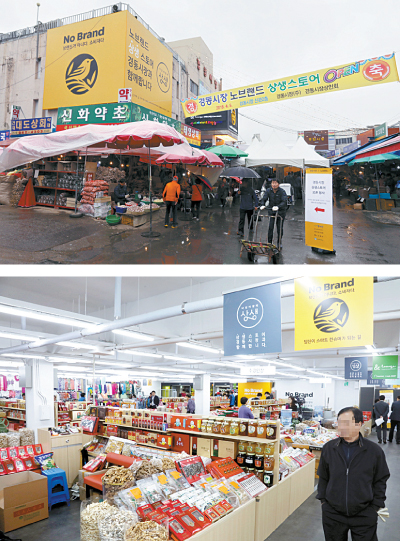 Top: The New Building of Gyeongdong Market is decorated with a No Brand store sign celebrating its opening on Thursday. Bottom: In front of the No Brand store are small ginseng shops that previously stood on the same floor. [EMART]

Emart’s No Brand store opened in Gyeongdong Market in Dongdaemun District, eastern Seoul, on Thursday in its first collaboration with a traditional market in the capital.

The 400-square-meter (4,305-square-foot) store is located on the second floor of one of the market’s three buildings. Customers who take the stairs to the second floor can get to No Brand after passing smaller stores that sell ginseng and other roots.

Like the four other No Brand stores inside traditional markets, the shop isn’t selling fresh fruit as the result of a months-long discussion with local merchants on the list of products it will sell. Most of the items are industrial goods or processed food made by Emart’s house brand.

Further back on the same floor is a resting area with tables and chairs and a children’s playground where shopping parents can leave their children for two hours. The service costs 5,000 won ($4.71) or 2,500 won for those who present receipts from the market.

The Gyeongdong No Brand store also has a coffee shop called Cafe Sup, which translates to forest. Starbucks Korea, a Shinsegae affiliate like Emart, designed the interior and will send its baristas to train the cafe staff. The Dongdaemun district office donated 2,000 books to a library that sits next to the cafe.

“Businesses here weren’t doing so bad until a few years back, when sales suddenly dropped at one point,” said Oh Gwang-soo, head of Gyeongdong Market’s merchant association. “Our merchants and I visited No Brand’s previous collaboration sites and saw that it was actually effective in pulling in younger customers.” The market requested in July that No Brand open a store.

Gyeongdong Market, which first opened in 1960, is one of the country’s largest traditional marketplaces for medicinal roots, especially ginseng.

Although the market is still fairly vibrant, it is far from its golden age in the 1980s. As young customers have drifted away, more storefronts became vacant. No Brand’s collaborative project with the markets has already had some notable successes.

The Dangjin Fish Market in South Chungcheong, for example, saw daily visitors increase by 30 percent after No Brand entered the market. The number of people who said they were visiting the market on their way to No Brand increased from 62 percent in April to 75 percent in December last year.