Court rejects detention of An for the second time

Court rejects detention of An for the second time 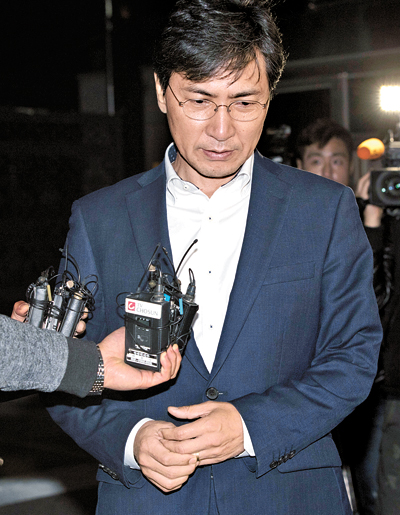 A local court struck down prosecutors’ request to detain former South Chungcheong Gov. An Hee-jung for allegedly raping and sexually harassing his secretary, saying Thursday that the accusations against him were “contestable.”

The prosecutors’ office asked the court to issue an arrest warrant for the second time Monday, claiming An destroyed evidence. Prosecutors accused him of trying to put pressure on his secretary and her acquaintances, while deleting her call history list before prosecutors got hold of her cell phone.

The court reiterated its earlier stance Thursday, adding that detaining An at the current stage of the investigation would excessively restrict his right to a defense.

An, 52 and married with two kids, is the highest-profile figure by far to be implicated in Korea’s Me Too movement. He was once was considered a strong liberal contender for the next presidential election in 2022.

Kim Ji-eun, 33, his former secretary, appeared on “JTBC Newsroom,” the 8 p.m. prime-time news show on cable channel JBTC, on March 5, asserting she was raped by him four times and sexually harassed more often during the eight months she worked for him. The most recent rape, she said, occurred in February.

An apologized the next day and stepped down as South Chungcheong governor, after which the ruling Democratic Party expelled him. A week after the JTBC interview, a second woman came forward with accounts she was raped by An three times from August 2016 to January 2017 and sexually harassed more often while working at the Institute for Better Democracy, An’s political think tank.

Prosecutors said they didn’t reference the second victim in both their attempts to detain An due to the complexity of the case, saying her allegations needed to be further investigated.

The Korean Association of Sexual Violence Relief Center, a local feminist group representing both victims, hinted last month that a third rape victim could be coming forward with allegations, but said she was still undecided whether to go public with her story.

An denied the rape allegations, saying his relationships were consensual.