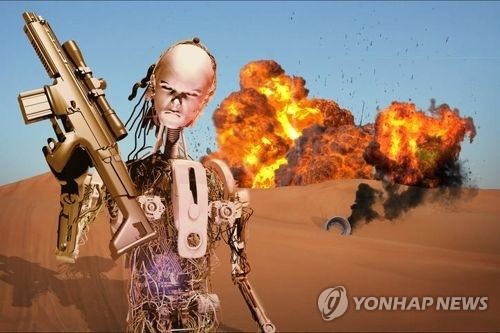 A group of more than 50 scientists from 30 countries are boycotting the Korea Advanced Institute of Science and Technology (Kaist) in response to its launch in February of a lab with a leading local defense firm that could lead to autonomous weapons, or “killer robots.”

“If developed, autonomous weapons will … permit war to be fought faster and at a scale greater than ever before. They will have the potential to be weapons of terror,” an open letter from the scientists released Wednesday warned.

The boycott includes refraining from visiting Kaist, hosting visitors from the university or cooperating on its research programs until it pledges to refrain from developing AI weapons that lack “meaningful human control.”

Shin Sung-chul, president of Kaist, responded to the letter in a statement that was sent to each of the scientists.

“I would like to reaffirm that Kaist does not have any intention to engage in development of lethal autonomous weapons systems and killer robots,” Shin said in the statement.

“Kaist is significantly aware of ethical concerns in the application of all technologies including artificial intelligence,” he noted, vowing not to “conduct any research activities counter to human dignity including autonomous weapons lacking meaningful human control.”

There has yet to be a response from the group of scientists led by Toby Walsh, professor of AI at the University of New South Wales, according to a Kaist spokesman, although Science Magazine quoted Walsh as saying he was heartened by Shin’s statement.

“It is good to see a public commitment by Kaist for the first time to ‘meaningful human control.’ This will add weight to the UN discussions,” he said. The state-run science research university opened the Research Center for the Convergence of National Defense and Artificial Intelligence on Feb. 20 in partnership with Hanwha Systems, a defense arm of Hanwha.

Amid escalating fears globally over autonomous weapons that could potentially cause mass casualties, Walsh, as well as the Human Rights Watch, made separate requests that Kaist explain whether the lab intends to develop killer robots. Kaist says it denied the allegation in an email at the end of March.