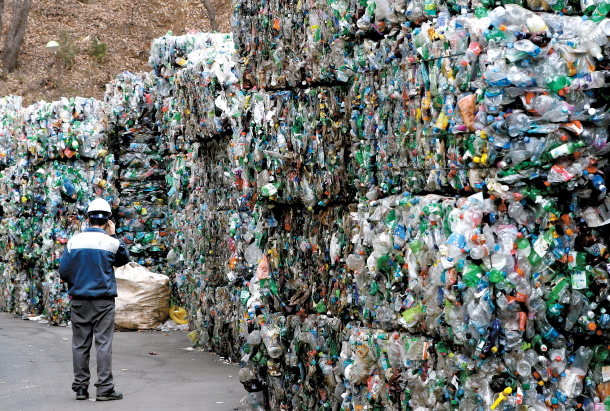 A worker at a recycling company examines piles of compressed plastic bottles in a yard in Chuncheon, Gangwon, on Thursday. [YONHAP]

As the confusion over recyclables continues in apartment complexes in Seoul and Gyeonggi, the Ministry of Environment on Thursday began an emergency round of checkups to find out which private companies are refusing to retrieve plastic and Styrofoam waste.

Forty-eight private recycling companies announced last week they would no longer retrieve plastic and foam waste because they could no longer make a profit from it. Paper collection was not affected.

The announcement threw people into confusion over how to discard their recyclables until Monday, when the Environment Ministry said in a statement that after negotiations, all 48 waste disposal companies agreed to resume regular services.

But the agreement may not have been as final as the ministry thought.

According to the Gyeonggi provincial government on Wednesday, 20 out of 31 local governments in the province said the companies were collecting recyclables the same way as before.

The rest are “in the process of negotiating.”

“We are in the process of negotiating to resume regular services, but some apartment complexes may experience inconveniences for a while,” said an official from the Resource Recirculation Division of the Gyeonggi provincial government. “We will try to reach agreement as soon as possible, and if we cannot, then we will have the city governments and county offices provide the services instead.”

According to the provincial government, the residents of some apartment complexes in Goyang were negotiating with the companies this week the terms under which the companies would collect the recyclables.

Some residential complexes in Suwon, Yongin, Hwaseong and Gunpo were also negotiating with the companies, it said. 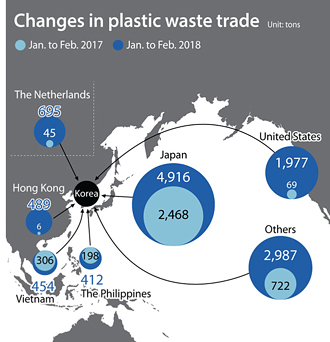 The problem is that the longer these negotiations pan out, some residential areas will see increasing piles of thrown away plastics and Styrofoam.

Korea has a strict waste disposal system in which food, general waste and recyclables including paper, plastic, cans and glass bottles must be separated. Failure to comply can result in fines.

Seoul and Gyeonggi are affected more than other regions because most of the recycling processing facilities and solid fuel factories are located there.

The Environment Ministry said on Wednesday that 43 out of 48 companies have agreed to resume regular services and that it is still trying to reach an agreement with the rest.

“We meant to announce on Thursday our long-term plan on recyclables,” said a spokesperson for the Environment Ministry. “But we decided to [postpone that and] first determine the exact state of where and why recyclables are not being collected.”

The crux of the issue

Part of the reason why the private recycling companies don’t want to collect plastic and foam waste is China’s decision to no longer import some types of recyclables.

For years, China has been processing over half of the world’s exports of paper and plastic waste. Last year it announced that it will no longer be importing 24 types of solid waste, including plastics and unsorted paper, citing domestic environmental issues such as air pollutants emitted from factories churning out solid fuel pellets from the waste.

(Plastic and other recyclable waste can be shredded and compressed to make solid fuel pellets, which can be burned for heating or used as fuel in gas or steam turbines.)

Some countries are now exporting their plastic waste to Korea.

With the influx of plastic waste and other recyclables in Korea this year, many private recycling companies have announced they don’t need domestic supplies.

“With China no longer importing these recyclables, the China-bound vessels carrying them have rerouted to Korea,” said Kang Pil-joo, head of Mijoo Resources, a private recycling company based in Incheon. “What makes it worse is that a lot of recycling companies here do not want to take Korean plastic waste because they are usually worse in quality than those imported from abroad.”

Some experts call for heightened regulations in Korea on importing recyclables.

“At this rate, recycling companies are going to go bankrupt,” said Ahn So-yeon, head of Geumho Resources, a private recycling company based in Yangcheon District, western Seoul. “The central government needs to step in with regulations to stop foreign governments from exporting so much waste into the country.”

“The current regulations allow any foreign country to export their waste to Korea, as long as they make a report about it to Korea,” said Hong Soo-yeol, head of Recycling Social Economy Research Institute based in Seoul. “Korea needs to heighten the standards of the recyclables it accepts so as to prevent countries from sending all their recyclables indiscriminately here.”

The Environment Ministry said it will seek measures to “incentivize more recycling companies to take Korean recyclables instead of foreign ones.”

“We have no plan as of now to ban waste imports like China,” said Han Jun-wook, head of the Waste Resources Management Division of the Environment Ministry. “In addition to incentivizing more recycling companies to take Korean recyclables over foreign ones, we will also put together a team in the ministry to focus on charting new export routes for Korean recyclables.”

By law, local governments are responsible for recycling in their jurisdictions. But some apartment complexes have partnered with private recycling companies to earn some profit by handing over the recyclables, which the companies then hand off to solid fuel pellet plants for profit.

Still, local governments have been collecting recyclables from individual houses and commercial areas for years. According to the Environment Ministry, each district in Gyeonggi and Seoul either has one such recyclable waste separation center or shares one in another district.

But with only one or less recycling facility per district, it is unclear if the option is viable.

On Tuesday morning, the workers at a local government-run recycling plant in Yangcheon District, western Seoul, were busy separating the recyclables by hand.

“I think more came in than yesterday,” said a worker as a one-ton truck drove into the plant, filled with plastic and foam waste.

The plastic and foam waste piled up some 10 feet at the plant on Tuesday morning.

“We went through some 70 tons of trash yesterday, I think it might be around that much today, too,” said the worker. “We’ll probably be working late into the night.”

Plastic and Styrofoam waste was placed on a 40-meter (131-foot) conveyor belt at the plant, on either side of which workers began separating them. Some of the pieces reeked as the contents inside had gone bad.

“I’ve come across dead animals inside plastic bags,” said a 51-year-old worker at the plant. “And it’s not uncommon to get punctured by needles and other sharp objects as we separate the objects.”

The plant said around 20 percent of the recyclables that end up there are recyclable. The rest are separated by workers as unrecyclable trash.

The plant said it does not get paid for unrecyclable waste when it hands it over to solid fuel pellet manufacturers -- in fact, it pays the manufacturers or incineration plants to take them.

And in Gyeonggi alone, 20 out of 31 such plants run by the provincial government do not have an automatic system that separates plastic waste from other waste, meaning workers have to manually separate the waste, according to a report by the Bareunmirae Party Rep. Ha Tae-keung.

“These facilities are already overworked, and workers are employed overtime separating the waste collected from individual houses and commercial areas,” said a spokesperson for the Yongin city government. “If the local government of Yongin needs to step in on recycling for apartment complexes, it would mean its already-overworked facility will have to process twice as much as before, which is not possible.”

The recycling facility of the Yongin city government is made to take care of 30 to 40 tons of plastic waste per day, the official said. But it takes in some 50 tons per day, according to the city government.

The Gyeonggi provincial government has requested money from the Environment Ministry to build additional recycling facilities.

“Even if we get funds, some residents will oppose building such facilities in the area,” said an official of a local government in Gyeonggi. “We have the blueprints for how we are going to design the facilities, but they will have to be changed anyway since they may have to take care of recyclables from apartment complexes as well.”

A shrinking international market for recyclable trash has driven down the domestic price of paper and plastic waste. According to the Korea Environment Corporation, recycling plants used to pay companies 147 won ($0.14) per 2 pounds of paper in January, but the price dropped to 110 won in February. The price of 2 pounds of plastic waste dropped from 330 won to 250 won in the same time period.

There are some in Seoul whose income is directly affected by the drop.

“This is the first time in my six years of collecting paper waste that I’ve seen such a drop in price,” said Kim Soon-deok, a 78-year-old woman, as she collected discarded cardboard boxes in an alley in Jung District, central Seoul, on Monday. “I collected waste for 13 hours yesterday and earned 4,000 won. They say that’s the price of a cup of coffee these days.”

“We pay 30 won per 1 kilogram of paper waste from these seniors who bring them to us,” said Kim Wang-ki, owner of a junk shop in Seongbuk District, central Seoul. “Then we sell them at 50 won per kilogram to a company which takes them to a processing facility. We can’t pay the old people more than this, or we will also have to close our business.”

“The central government needs to allot more funds to support these seniors,” said Lee Byung-hoon, professor of sociology at Chung-Ang University in southern Seoul. “Korea’s welfare policy must expand to include these old people who pick up plastic and paper from the streets.”